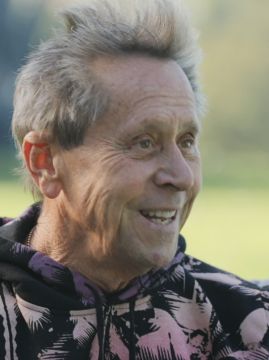 Graham spends the day with Oscar-winning producer Brian Grazer. Known for sports movies Rush, Friday Night Lights, and Cinderella Man, Grazer details his strategies for dealing with Hollywood’s biggest stars. Grazer also discusses his curiosity conversations with some of the world’s greatest minds, such as Elon Musk, Jeff Bezos, Michael Jackson, and Steve Jobs. Plus, an emotional Grazer talks about how his special needs son influenced ‘A Beautiful Mind.’ Partner Ron Howard and friend Bob Iger chime in with some of their own Grazer stories. And Grazer gives Graham a tour of his Santa Monica home, including his impressive art collection, before they two set off on a bike ride and play a little tennis.

Brian Grazer: Am I going to kill Tom Hanks?

Oscar-award winning producer Brian Grazer tells his side of the story, did he really run over Tom Hanks with a surfboard? Plus, Ron Howard recalls the joke he played on Grazer after being asked to present a script to John Belushi, and the unexpected outcome.

Brian Grazer: I faked being rich

Television and film producer Brian Grazer went to the University of Southern California during a time he said his fellow students were all “really rich.” Working 40 hours a week while going to school, Grazer saved to buy his own Porsche, but in order to fit in with his uber wealthy classmates, he lied and said his parents gave it to him. Following college Grazer used a tip he got eavesdropping to get a job as a law clerk with Warner Bros studio, which he leveraged to get time in front of some of the entertainment industry’s great luminaries, including Warren Beatty and Lew Wasserman. Grazer describes some of his first jobs outside of Hollywood; he grew up with odd jobs, even making money on a “voluntary payment” paper route. His friend Tom Hanks says this makes him a perfect producer. Plus, Grazer recounts why he buried money in the San Fernando Valley.

Brian Grazer: ‘No’ has no relevance to me

Storied film and television producer Brian Grazer’s superpower may be getting the most from talent. Or maybe, not taking no for an answer? The Oscar-winner recounts how he got the best from Tom Cruise, and the intense lengths he went to making Jim Carey the Grinch. Plus, partner Ron Howard describes the tenacity with which Grazer pursued the creation of the 1984 hit Splash, and the sacrifice he endured to get the film made.

Television and film producer Brian Grazer has made a habit of discreetly leaving photos of himself behind when he visits the homes of other people. From Fidel Castro to George Clooney, Grazer becomes a part of their interior decor. Long-time friend and Disney executive Bob Iger says Grazer left two in his home. Ron Howard did talk him out of leaving one behind when they met with George Lucas, though. So, Graham gives it a try, tucking a framed image of himself on a desk in Grazer’s home.

Oscar-winning producer Brian Grazer has “curiosity conversations” every two weeks, without fail. Grazer sits down for discussions with people from wide-ranging backgrounds to learn not just about their fields and expertise, but their passions. Over his decades in this practice, Grazer has met with a variety of people, from Michael Jackson to Jay-Z, as well as Steve Jobs and Jeff Bezos. Grazer’s partner Ron Howard gives his take on the practice, and describes how Grazer’s own passion and zeal are often the reason great movies are made.

Oscar-award winners Brian Grazer and Ron Howard recall the Royal Premier of Apollo 13, and the black-tie dinner that followed. The frequent collaborators were seated with Princess Diana. Where Howard recounts some flubs in etiquette, Grazer decided to throw caution to the wind and entertain the princess with stories from Hollywood. Grazer said by the end of the dinner (and a shared bowl of ice cream) he felt he was dating Princess Diana. But not really.

Successful television and film producer Brian Grazer recalls the intense fights his parents had when he was young, and how their marriage and subsequent divorce made him admire “normal” families. But he found stability in his grandmother, who would support and encourage him as dyslexia wreaked havoc on his grades. Grazer couldn’t read or write until he was in the fifth grade. His struggles with traditional education taught him the art of negotiation. Plus, Grazer gives his thoughts on marriage, and his fourth wife, marketing executive Veronica Grazer, describes how the universe conspired to bring them together.

Oscar-winning producer Brian Grazer becomes emotional when speaking about his eldest son, Riley, who has special needs. Grazer discusses the difficulty he faced trying to find a diagnosis for the issues Riley was experiencing and how his diagnosis with an acute form of Asperger’s changed Grazer’s view of the world. Watching Riley be stigmatized and bullied by other children motivated Grazer to make 2001’s Best Picture, A Beautiful Mind, which Grazer said is the most gratifying film he has ever made. Plus, Ron Howard, the film’s director, recounts the impact the movie had on mental health.

Oscar winners Brian Grazer and Ron Howard boast the longest partnership in Hollywood history, says Grazer, having worked together for almost 40 years. Howard says they are “all in” for each other. Grazer describes their first meeting, which didn’t actually happen, and the moment he knew he would bet on Ron Howard. The pair have supported each other through successes and flops, as well as a couple of embarrassing moments.

Brian Grazer: It wasn’t cocaine, I was just high strung

Ron Howard used to think his creative partner was on cocaine. Not really, Oscar-winning producer Brian Grazer just has a lot of energy. Bob Iger describes his long-time friend as an extroverted introvert, who likely greets every day with a smile. Grazer himself says he tends to be overly friendly, because of karma. Grazer says despite his success, he still has a lot of fears, from personal complacency to financial hardship. Plus, Grazer explains why he doesn’t call people out for “screwing him over.”

Film and television producer Brian Grazer met entertainment executive and former Disney CEO Bob Iger when they were both going through separations from their spouses. The two men developed a fast friendship, something the Grazer says is important to him. Now, Iger and Grazer are constant fixtures in each other’s lives, from weekly coffee to cycling excursions.

Oscar-winning producer Brian Grazer has a mixed history with sports. He says he was the toughest kid in his elementary and middle school, but that didn’t keep him from very publicly getting cut from the high school football team. Grazer opted to start swimming and ended up breaking the City of Los Angeles record in the 100 meter butterfly. Grazer has been involved in many film movies throughout his career, from Rush, the sports biopic about Niki Lauda’s rivalry with James Hunt, to Friday Night Lights. Cinderella Man, the film inspired by the life of James J. Braddock, was screened at the White House, giving Grazer the opportunity to meet John McCain, Barack Obama and George W. Bush, who Grazer describes as being “comfortable in his own skin.” Plus, Grazer recalls when Brazilian soccer star Pelé flew his daughter to Cannes.

Hollywood is changing, says film and television producer Brian Grazer. It used to be about selling the passion projects, but with streaming becoming prominent, the shift has gone to data and logic. Grazer and his Imagine Entertainment co-founder Ron Howard discuss the shift in the entertainment landscape, how that affected Imagine, and what their new project, Impact, looks to unify the entertainment industry.

Oscar-award winning producer Brian Grazer gives Graham a tour of his Santa Monica home. Grazer rehabbed the 12,000-square-foot mansion that once contained a Matterhorn slide into a contemporary palace, adorned with one-of-a-kind artwork. From original works by pop-art icon Andy Warhol and Mark Bradford, Grazer recounts how Steve Martin helped him get started collecting. It was actually Grazer’s daughter Sage that set the Imagine Entertainment founder down the path of becoming an artist himself. Plus, Grazer teaches Graham how to use a blow dart gun, a hobby introduced to him by a first-contact tribesman the rockstar Sting introduced him to. Grazer recounts how actresses Brie Larson and Zendaya fared when trying out the gun, and recalls the time he wanted to shoot someone.

Legendary film and television producer Brian Grazer is an avid cyclist, sometimes riding 20 miles or more with friend and former Disney executive Bob Iger. Grazer takes show host Graham Bensinger on a bike ride around his neighborhood. Then, the pair hit the tennis court for some quick practice, and Grazer dishes on some of his famous opponents. Plus, Grazer explains why he got into boxing to help him while he was surfing.