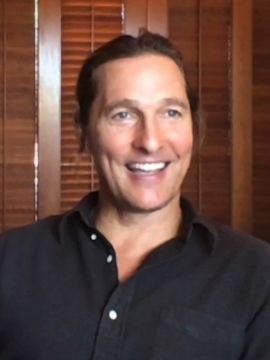 Actor Matthew McConaughey sits down with Graham from his home in Austin, Texas. The two reflect on McConaughey’s remarkable ascension to stardom, the bold pursuit that propelled him to his first leading role and even agreeing to extreme weight loss for his character in Dallas Buyers Club, which won McConaughey “Best Actor” hardware at the Academy Awards. The loyal University of Texas alumnus also shares vivid stories of his upbringing outside Dallas and hints at a potential political run. Plus, McConaughey discusses his New York Times best-selling memoir, “Greenlights,” and the growing reach of his Just Keep Livin’ Foundation.

Matthew McConaughey grew up knowing he won the Little Mr. Texas pageant, his mother reaffirming it time and again, only to find out a couple years ago that he was actually the runner-up. He says his mom was the “Queen of Relativity,” even helping him plagiarize an Ann Ashford poem that won his 7th-grade poetry contest. But that was just one example of her outlaw existentialism, he said. His parents’ marriage was just as storied, from fights that ended in broken bones and passion on the kitchen floor, to his Mom filling his Dad’s car with water.

Matthew McConaughey: My Dad wanted us to stand up to him

Matthew McConaughey’s father had an interesting ‘right of passage’ for his sons. In trying to prepare his boys for their future, he would push them towards the day when they would disagree with him, and ultimately go their own way. For Matthew, that moment was when he told his father he would not be going to law school, as planned, but rather film school. McConaughey came to that decision when, between a stack of Playboys and Sports Illustrated, he found a paperback copy of ‘The Greatest Salesman in the World.’

Matthew McConaughey offers his take on his friend and NFL owner Dan Snyder’s path towards stabilizing the culture – after much disruption – for the Washington Football Team. McConaughey continues on by sharing sports stories of his dad’s riff with legendary NCAA football coach Bear Bryant and his own good fortunes of landing four hole-in-ones out on the links.

Matthew McConaughey on strange A Time to Kill audition

A really bad audition actually led Matthew McConaughey to his breakthrough role as Jake Brigance in 1996’s ‘A Time to Kill.’ McConaughey reflects on the series of events that took him from a relative nobody to a star. Plus, he recalls the impact of his father’s death, just five days after he started filming ‘Dazed and Confused’ and the two thoughts he has when he finishes any film.

For Matthew McConaughey, preparing for a role starts with the text, and he doesn’t move on to the imagination component until he feels that he knows the words on the page. McConaughey describes his preparation process, and the sometimes unusual activities he undertakes, like scouting out strip clubs alongside co-star Channing Tatum for their roles in Magic Mike.

Matthew McConaughey lost approximately 50 pounds prior to filming his Oscar-winning role in Dallas Buyers Club, even though there wasn’t any guarantee the film would be made. McConaughey did it to show people he was serious. He describes the extreme diet he adhered to to lose the weight, and the impact it had on his body.

Matthew McConaughey on being molested

Matthew McConaughey was knocked unconscious and molested by a man when he was a teen. The actor says it didn’t change his world view, it was clear to him that he was in an “unfortunate situation.” This was not the only tragic encounter he had as a young man, he was blackmailed into losing his virginity, and at the time he was sure that he was it meant he was going to hell for having premarital sex.

Matthew McConaughey: Why I waited to get married

Actor and author Matthew McConaughey shares premarital conversations between him and his now-wife Camila Alves McConaughey, including how they want to approach their partnership differently than their parents. Later, he offers up a few of the motivational mantras both he and Camila work to instill in their children, including how they don’t subscribe to words like “can’t” and “hate,” and the long-term benefits of dealing with discomfort immediately.

Matthew McConaughey details his eventual departure from frequent, starring roles in romantic comedies, despite lucrative pay and widespread popularity. The renowned actor and author walks us through an immediate halt of acting opportunities once he informed his agent he would no longer accept rom-com roles, the eventual “payout” in landing more fulfilling roles. Plus, his pivot into writing “Greenlights,” his New York Times best-selling memoir released in late October.

Matthew McConaughey: Offering students a safe space with the foundation

Actor and author Matthew McConaughey explains the mission of the Just Keep Livin’ Foundation he started with his wife Camila in 2008. What started as supporting students across two high schools in Los Angeles now enlists 84 teachers to reach 3,000 students across six states. McConaughey shares a few personal stories of young people in the program taking impactful steps forward, and the foundation’s unique emphasis on expressing gratitude.

Actor and author Matthew McConaughey shares his preferences for several tough calls, including whether he’d choose acting over teaching and Channing Tatum over Leonardo DiCaprio.