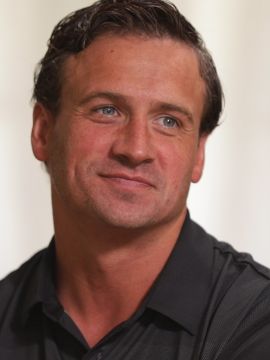 Graham travels to Gainesville, Florida, to spend the day with 12-time Olympic medalist Ryan Lochte. The second-most decorated male swimmer of all time has set his sights on the 2021 Tokyo Olympic Games. Lochte opens up about the controversies and struggles out of the water that have impacted his career. Plus, Graham sits down with Lochte’s wife, former-Playboy Playmate Kayla Rae Reid, his father and his coach. And the two get in the pool where the gold medalist gives Graham a few tips.

Olympian and swimming champ Ryan Lochte details some of his most serious, and seriously funny, injuries, from being tackled by a fan to simply jumping in the pool. Plus, hear how brushing his teeth may have had an impact on McDonald’s bottom line.

Ryan Lochte on Tokyo: I want to prove everyone wrong

Swimmer and Olympian Ryan Lochte says the Tokyo Olympics will be his most important games yet, because it is his opportunity to show that age is just a number, and he can still compete. Lochte struggled with finding joy in swimming following the 2012 Olympic games. It was the birth of his children that helped him reclaim his happiness. Lochte talks about why he keeps his goals secret, but confirms one that might have been leaked. Plus Lochte explains why the Olympics are important to him. And Lochte’s father, Steve, talks about a goal his son has been keeping close to the chest.

Ryan Lochte started swimming at a young age, but says he wasn’t a naturally talented phenom. In fact, as a young swimmer, he spent more time trying to get out of practice than he did swimming. But one loss changed it all, Lochte turned a corner and became dedicated to his craft. That didn’t mean that swimming consumed him, Lochte discusses the sport/life balance that his father instilled in him, and that he still implements to this day. And Steve Lochte recounts the moment his son decided he would never lose another race.

Ryan Lochte: I don’t speak to my mom

Olympian and swimmer Ryan Lochte talks about his relationship with former teammate, competitor, and friend, Michael Phelps. Lochte recalls how he and Phelps would push each other to be better, and created an historic moment in swimming. Plus, Lochte recalls how Phelps, the most decorated swimmer of all time, helped him when he was struggling after the 2012 Olympics.

Ryan Lochte in tears: My dad called me great

Swimmer and Olympian Ryan Lochte grew up inspired by fellow Olympic swimmer Pablo Morales. The 1984 Gold Medalist was Lochte’s goal: break a world record while winning Olympic gold. Lochte tearfully recalls the moment his goal came true, and his father, who was also his coach, finally declared him “great.” Steve Lochte recounts the moment his son reached that goal.

Ryan Lochte recalls ‘Lochtegate,’ the 2016 incident where Lochte and fellow US swim team members fabricated being held at gunpoint in Rio de Janeiro. Lochte was ultimately suspended by USA Swimming for 10 months, and lost his commercial sponsors. The time that followed was dark for Lochte, he even wondered what would happen if he went to sleep and didn’t wake up. And while he is still struggling to find sponsors, he attributes the situation to solidifying his relationship with his wife, Kayla. Plus, Lochte talks about his 14-month suspension for taking a vitamin B-12 by IV. Kayla Lochte describes her surprise at his suspension, and her feelings of responsibility. And Steve Lochte, Ryan’s father, gives his perspective on the media’s coverage of the Rio incident.

Ryan Lochte recounts the early days of his relationship with former Playboy Playmate Kayla Rae Reid. The couple hit it off early, but Lochte’s intentions weren’t always so honorable. Plus, Lochte details his elaborate proposal, which did not quite go to plan.

Ryan and Kayla Lochte are the proud parents of son Caden and daughter Liv. Ryan says that he is a ‘guppy’ for his kids, often sneaking them candy even when wife Kayla says no. Lochte has enjoyed teaching his son to swim, but says he won’t push his kids into swimming, he just wants them to do whatever they want, 100 percent.

In 2019 Ryan and Kayla Lochte appeared on Alex Rodriguez’s CNBC show, ‘Back in the Game.’ The show is billed as Rodriguez giving back “by mentoring athletes and entertainers who’ve fallen on hard times.” Lochte said he didn’t like it and that the show was “completely wrong” when it portrayed his penny-pinching wife as a superficial person. To add insult to injury, the “deal” A-Rod set up for Lochte with personal training app Fitplan was not paid out as agreed, Lochte said. Lochte’s money struggles started with his desire to please others, which often led to spending beyond his means. He says he never worried because the money was always coming in. But that stopped when he lost his sponsorships following an incident in Rio. Plus, Lochte talks about the experience of filming a reality TV show and getting to meet Lil Wayne.

Ryan Lochte: Getting creative with savings

Olympic swimmer Ryan Lochte recalls the summer in high school when he saved for a new sound system for his car, only to blow out the speakers by blasting Lil Wayne a little too hard.

Swimmer Ryan Lochte gives away many of his medals to his fans, including those he won breaking records. He says he wants to be able to give the spark of joy and passion to someone else. Lochte is excited when fans want his autograph; much different than the experience he had as a child meeting one Olympic swimmer. Plus, Lochte talks about what life might look like for him after competitive swimming.

Swimmer Ryan Lochte doesn’t want to downplay the seriousness of COVID-19, his family has seen the impact firsthand. But Lochte says he has enjoyed being home with his family during quarantine. Plus, Lochte reacts to the possibility of canceling the 2021 Olympics.

Swimmer and gold-medalist Ryan Lochte gives us a tour of his Gainesville, Florida, home. Lochte shows off his unique and inspirational artwork, as well as his Olympic medals and memorabilia. Plus, Lochte recounts meeting his inspiration, Olympic gold-medalist Pablo Morales.

Olympic swimmer Ryan Lochte jumps in the pool with show host Graham Bensinger. Lochte teaches Graham proper form, plus the two see who can swim farther on one breath.

Former Playboy Playmate Kayla Rae Reid talks about her courtship with Olympian Ryan Lochte. Reid initially dismissed Lochte for his partying ways but says she was surprised by how kind he was and the importance he put on family. Reid and Lochte’s relationship was tested early by scandal, some of which Reid is concerned she caused. Reid also talks about Lochte’s diet and how his outlook on food changed her own. Plus, hear her outlook on the 2021 Tokyo games and why they could be the most special for Lochte.

What is Ryan Lochte’s greatest strength?

Ryan Lochte’s swim coach, Gregg Troy, says that racing and swimming were never pressure situations for Lochte, which helped him compete at higher levels. Troy also discusses the competition between Lochte and fellow swimmer Michael Phelps. Both racers are skilled, and they also have that “x” factor. Troy said that Lochte strives to make those around him better, oftentimes telling his biggest competitors where they can improve. Plus, two-time Olympic gold medalist Caeleb Dressel discusses swimming and training with Lochte.