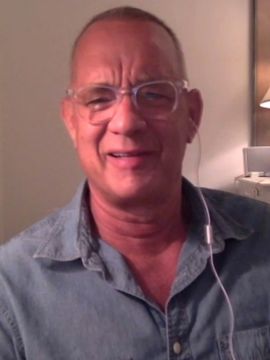 Acting icon Tom Hanks joins Graham from Greece to talk with us late into the night about some of his most rewarding roles, as well as the challenging ones. Hanks opens up about his family, from his first marriage culminating in a difficult divorce that left him questioning his parenting; to finding roots with his second wife, actress Rita Wilson. Hanks also reveals that his father witness the murder of his own father. Plus, the Oscar-winner talks about the game of baseball, and shows us scars from his days surfing with Brian Grazer.

Tom Hanks on Trump: Not sure he took his oath seriously

Oscar-winning actor and activist Tom Hanks talks about his involvement in politics, and why this moment in history is so important. Hanks questions whether Donald Trump took his Presidential oath seriously. He also recalls speaking at the inauguration of President Barack Obama. Plus, hear his stories from moments in the White House, spanning across three presidencies, including the moment his wife, actress Rita Wilson, ran into President George W. Bush on her way out of the restroom.

Tom Hanks on Omaha Beach: I was in a holy place

Tom Hanks calls himself a “lay student of history,” and his filmography indicates a fascination with war. When he was 10 years old Hanks saw a photograph of a young polish boy being taken from his home during the Holocaust, and it sparked a realization in Hanks, and began his march into adulthood. But it was Laurence Olivier’s The World at War that showed Hanks the scope of war, but also showed him that information could be entertaining. Plus, Hanks recounts stepping foot on Omaha Beach following filming Saving Private Ryan, and comments on gaps in the teaching of American History.

Oscar-winning actor Tom Hanks talks about the art of acting. The 44-year veteran says that it is a high-wire act, with a 50% chance of failure at any given time. He tackles the daily unpredictable nature of film, and why he still loses sleep after accepting a job.

Tom Hanks has often been cast in films based on real circumstances, from Chesley “Sully” Sullenberger in 2016’s Sully, to U.S.Rep. Charlie Wilson in 2007’s Charlie Wilson’s War. Hanks says that he spends time with the people, learning about their lives so he can carry their DNA into his performance. He also talks about the physicality and mental strain of his iconic film Cast Away. Plus, find out why taking a pay cut for filming 1994’s Forrest Gump ended up being a good decision.

Tom Hanks on Toy Story: My out of body experience

Tom Hanks discusses Toy Story, the technologically innovative animated film that captured a generation. Hanks says the series almost fell prey to a typical studio strategy of releasing the second installment of an animated series straight to DVD, but he and co-star Tim Allen fought for it to hit the big screen. Hanks recalls going into the studio, the same studio he went into for his first lines as cowboy Woody, for reading the last lines of the landscape-shifting franchise. Plus, Hanks describes his emotional reaction to finishing the series, and the physically-demanding nature of voice-over work.

Tom Hanks’ father suffered a devastating trauma as a young boy, witnessing his own father be murdered by a hired hand. Hanks said the trauma never left his Dad, who seemed to find no joy in life. The two were not close, until a movie, and Hanks’ own divorce, changed their conversation. Plus, Hanks recounts telling his father he was going to work as a professional actor, and being able to attend the Oscars together when Hanks was nominated for Big.

Tom Hanks on COVID: My bones were falling apart

Oscar-winning actor Tom Hanks and his wife, actress Rita Wilson, were among the first celebrities to publicly announce they had COVID-19. Although he says the virus didn’t have a dramatic or lasting impact on him, it has impacted the release of his latest film, Greyhound. It was scheduled to be released early in 2020, but the pandemic changed that. Hanks found himself trying, unsuccessfully, to sell the $40 million film to networks, but ultimately finding a home for it on Apple TV. The streaming service’s purchase of the film put it immediately in the black, whereas there was no guarantee it would have had success in theaters. Hanks says there are some films that are more suited for streaming than others, but ultimately, there may not be the option to be back in theatres anytime soon.

Tom Hanks did not always have the finances of a successful actor. The Oscar winner describes how he fed his family on just $45 a week, having to borrow money from producers while filming his breakthrough role for Bosom Buddies, and the karmic revenge he’s gotten on a bank that wouldn’t cash his unemployment check.

Tom Hanks: Parenting is a process of elimination

When Tom Hanks’ children were young, he tried to just be a dad, the guy he drove the carpool. He didn’t want to make his fame seem more than it was. Which admittedly, was easier with his older son, actor Colin Hanks, and daughter, Elizabeth. But for his younger kids, sons Theodore and Chet Hanks, it was more difficult to keep his fame from them. Hanks said he didn’t want to give his children their careers in acting, but gave both Colin and Chet a leg up, their first film roles. From there on, he wanted them to make it on their own. Hanks said that learning how to be a good parent is really just a process of elimination.

Tom Hanks: I take my typewriter to baseball games

Tom Hanks waxes poetically about God’s game, baseball. The former LA Dodgers season-ticket holder describes some of the most memorable moments he saw, “just because he had a ticket.” He likes to keep score, and a running commentary, so he will take his typewriter to games. Plus, he talks about his fondest memory from A League of their Own. Hint, it wasn’t acting.

The most decorated surfer of all time, Kelly Slater, asks Oscar-winner Tom Hanks about his time surfing with Brian Grazer. An enthusiastic Hanks shows off the scar Grazer left him with, and describes the moments on the water that make him feel like Superman.

Tom Hanks on childhood: I fell through the cracks

Tom Hanks and his siblings moved around a lot as a child. And while that was difficult for his shy brother, Hanks said he never walked into a new social situation and felt uncomfortable. His upbringing though made him uniquely suited to be an actor, he said. The actor grew up independently, including driving himself to the theatre to see plays as a young man. Hanks describes being inspired, and the realization he had when in rehearsals for one of his first plays.