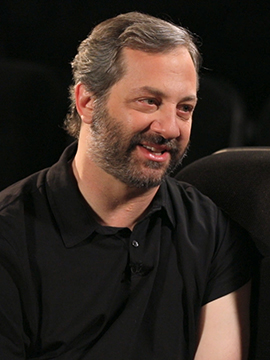 Graham visits with famed producer, director and comedian, Judd Apatow in Hollywood. The filmmaker admits his lack of athletic ability led him to comedy and explains the lessons learned from conversations with Jay Leno and Jerry Seinfeld while he was still in high school. Judd shares stories from casting current sports stars including LeBron James and John Cena, and credits his mentor, the late Garry Shandling, for a signature writing style that led to blockbuster hits including “The 40-Year-Old Virgin,” “Knocked Up” and “Pineapple Express.” The Hollywood star also gives Graham a tour of his office, a self-described “hoarders paradise.”

Judd Apatow on growing up idolizing Steve Martin, missing his appearance on a favorite TV show and at 13, getting turned away at Martin’s front door

Judd Apatow on creating a radio interview show in high school, gaining access to some of the top comedians at the time and lifelong lessons learned throughout the process

Judd Apatow: I chose The Dating Game over college

Judd Apatow on his decision to drop out of college and enjoy his trip to Acapulco – a prize for winning as a contestant on “The Dating Game.” Plus, learning to live within his means and accepting a lifestyle of blue collar work while writing jokes.

Judd Apatow on his introduction to show business alongside friends Adam Sandler, Jim Carrey and Ben Stiller and how the universe steered him towards writing and producing

Judd Apatow on instantly falling in love with wife, Leslie Mann on the set of The Cable Guy and collaborating with her professionally

Judd Apatow shares stories of his initial impressions of Amy Schumer and Lena Dunham, and how it led to working with them on “Trainwreck” and HBO’s “Girls,” respectively

Judd Apatow gives a glowing review of his experiences working with LeBron James on “Trainwreck” and how John Cena smoked the competition during his casting call, for the same feature film

Judd Apatow reflects on co-directing a “30 for 30” documentary on Doc Gooden and Darryl Strawberry, pondering whether athletes would react similarly to comedians and his surprise at the freshness of both Doc and Darryl’s bouts with addiction

Judd Apatow on how divorce made him grow up quick

Judd Apatow reflects on the impact of his parents’ divorce as a child, plus how his lack of athletic ability led to an interest in comedy

Judd Apatow on his mentality towards comedic work, his best advice for aspiring professionals and the pros and cons of constantly thinking in disaster mode

Judd Apatow shares stories of his friend, the late Garry Shandling, including spiritual lessons from Garry’s personal journal, a remarkable first project together at the Grammy Awards, lessons in comedic writing and Garry’s free advice on “The 40-Year-Old Virgin”

Judd Apatow discusses Bill Cosby’s sexual assault allegations, including what angers him the most about Cosby’s treatment of his accusers

Judd Apatow shares his thoughts on Donald Trump as the Republican nominee for President, including his concerns regarding Trump’s sanity and intelligence

Judd Apatow on why he decided to bring his career full circle and return to performing as a stand-up comedian, partly incited by a rough guest appearance with Conan O’Brien

Judd Apatow: Tour of my office

Judd Apatow gives Graham Bensinger a tour of his office, which includes a look at memorable photos on the wall, two types of tabasco sauce and gifting Graham an expired debit card