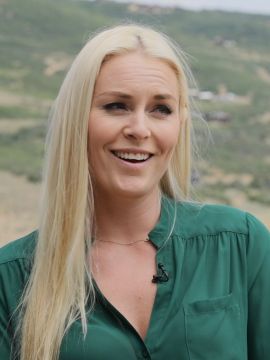 Graham travels to Park City, Utah, to spend the day with world champion skier Lindsey Vonn. Vonn opens up about the emptiness and depression she encountered following her retirement, and finding purpose with her foundation. Plus, Vonn reveals the alternate career that could have been, and pushes Graham to the limit at an elite training facility.

Olympic skier Lindsey Vonn shows off the vistas of her beautiful 24-acre Utah estate. Vonn wanted to leave her home in Vail, Colorado, because of the memories of countless injuries and hospital visits. With views of Deer Valley, the secluded property offers Vonn a retreat to enjoy with her three dogs.

Lindsey Vonn: Family gave up everything for my skiing

Olympic skier Lindsey Vonn grew up the eldest of four siblings. Her mother suffered a stroke giving birth to Lindsey and her constant strength was an inspiration through injuries and recovery. Lindsey’s parents initially split their time, and their family, between their native- Minnesota and Vail, Colorado, to help further their daughter’s ski-racing career. Eventually though, the Vonn family made the permanent move. Lindsey felt guilt over displacing her brothers and sisters and it motivated her to do more in her career.

Olympic skier Lindsey Vonn says the best advice she ever received was to just be herself. That meant that she didn’t change her technique, despite her critics. The doubts of coaches and cohorts motivated her, especially at the Olympics. But Vonn never stopped striving for greatness, focusing on physical fitness with Navy Seal-style training. Despite her success, Vonn still felt something was missing. She talks about self-doubt, motivation and living without the adrenaline rush now that she is retired.

Olympic skier Lindsey Vonn talks about the familial pressure that accompanied her debut at the Olympics, and her mental state during the race that won her the gold. She wanted to call her father, but the two weren’t speaking at the time. Vonn reveals that her divorce was actually what initiated the repair of their relationship, and helped her have her career peak.

Lindsey Vonn on P.K. Subban’s marriage proposal: I thought he was kidding

Olympic skier Lindsey Vonn opens up about her relationship with New Jersey Devils’ hockey star P.K. Subban. Vonn says Subban likes to push her buttons, and that was evident from the first time they met at the ESPYs. Subban proposed to Vonn, but their wedding was delayed due to the COVID-19 pandemic. But Vonn says that isn’t going to delay their life together.

Lindsey Vonn on interracial relationships: I get hate

Lindsey Vonn discusses the trials that come with her interracial relationship with New Jersey Devils’ hockey star P.K. Subban. Vonn speaks candidly about the new challenges she faces, and how she is looking to her fiance’s family for education and guidance.

To make herself a better athlete, Lindsey Vonn would train against the men. After clocking mere 100ths of a second behind the great Norwegian skier Aksel Svindal, Vonn wondered if she could compete against them as well. Her petition to the International Ski Federation to ski against the men was met with hesitation, Vonn said she was sure some male competitors were afraid she’d beat them. Ultimately, though, Vonn said she knows she’d do well, but wouldn’t come out on top, and may actually get herself hurt.

Lindsey Vonn to Mikaela Shiffrin: Be part of the team

World-champion skier Lindsey Vonn says that there are some serious trials facing US ski racing, including how it treats its athletes. She wants to help with the recruitment of young talent, but acknowledges that funding may be a difficult hurdle. Vonn also talks about her challenging relationship with fellow skiing phenom Mikaela Shiffrin. Vonn criticizes Shiffrin’s leadership style, and questions Outside Magazine’s claim that Shiffrin is the world’s greatest.

Lindsey Vonn: I’m in pain all the time

Ski racing at the top of the sport has taken an extreme physical toll on Lindsey Vonn. Vonn lists her multitude of injuries, and details some of the difficult recoveries she’s been through. Vonn treated every doctor’s order as a negotiation, often going back to training long before she was initially told. But years of injuries have a lasting impact on Vonn, who says she spends every day in pain. Ultimately, she retired because she wasn’t sure she could physically win any more, and wanted to ensure she had a future beyond racing.

Olympic skier Lindsey Vonn says she doesn’t ski anymore. She can’t, her body won’t hold up to the speed, and going slow would be like driving a Prius after Formula 1, she says. So she stays away from it to keep herself safe. But in doing so, she is developing a life beyond skiing, spending time with her family, friends, and fiance, hockey star P.K. Subban, and developing her production company, Apres Productions. This is in sharp contrast to her life at the peak of her career, which she said was very lonely.

With little in the way of traditional education, Lindsey Vonn got into Harvard University. Over her four-day business course, she learned just how much she actually knew about business, and it was more than she originally thought. Plus Vonn teases some upcoming projects with her new production company, Apres Productions, and the work she is doing with iconic actor Robert Redford.

Lindsey Vonn: I saved a girl from suicide

An emotional Lindsey Vonn opens up about using her sport, and her position as a star athlete, to help others. The Lindsey Vonn Foundation provides scholarships and programming for education, sports, and enrichment programs for young people. Vonn recounts connecting with one girl who attended the Strong Girls camp, and later wrote to Vonn, saying prior to camp, she self-harmed, and wanted to kill herself. The camp and Foundation helped her, and Vonn says that made all of her career struggles worthwhile. Plus, Vonn talks about “career day,” a program she developed during quarantine to help mentor and inspire young people.

Working out with Lindsey Vonn

Olympic athlete Lindsey Vonn takes show host Graham Bensinger through her workout routine. At the U.S. Ski & Snowboard Center of Excellence, Vonn recounts the meeting with former-Olympian Picabo Street, that made her want to step up her competitive game. Vonn also challenges Graham to join in her exercise routine.

Lindsey Vonn on Dwayne Johnson: We work out together

Olympic skier Lindsey Vonn says Dwayne “The Rock” Johnson is just as nice as you’d think he was. She discusses how they met, and the lessons she takes from watching him work.

Lindsey Vonn on F1 offer: Told I couldn’t have kids

Graham gets in the car with Lindsey Vonn, a self-proclaimed adrenaline junky. With Graham holding on tight, the pair head to the gym. Vonn says she enjoys driving, and even considered racing Formula 1, but didn’t want to commit to not starting her family. Plus, Vonn’s fiance P.K. Subban calls and serenades Vonn before weighing in on her driving skills.

Olympic ski racer Lindsey Vonn competed in a stressful, high-octane sport. What she does to relax might surprise you.

Downhill or Super G? Vail or Park City? Goats or Cows? Lindsey Vonn has to decide!