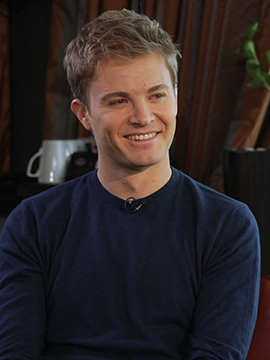 Graham spends two days in Monaco with reigning Formula 1 champ, Nico Rosberg, who shocked the world by retiring just days after winning his first F1 title. Rosberg reveals intimate details of his decision to retire, immense stress of his rival Lewis Hamilton trying to steal the championship and the pride of following in his father’s footsteps. Plus, Rosberg shows Graham part of his hometown, including a surprise stop by local police and attendance at the Laureus World Sport Awards with commentary from Usain Bolt and Gary Player, among others.

Nico Rosberg on why Mercedes-AMG Petronas’ commitment to never compromising continually places its F1 drivers at the podium, how that compares to his early Formula 1 career with Williams’ F1 team and why Fernando Alonso of McLaren-Honda cannot win in his current environment.

Nico Rosberg shares details of his racing mentality, including the fear or crashing, processing a plethora of inputs and customizations at 200 miles per hour and the dangers of thinking about anything beyond the race at hand.

Nico Rosberg on following in his father’s, Keke Rosberg’s footsteps and winning a F1 world championship, plus what it was like growing up the son a famous F1 driver and when Nico decided to fully invest in a racing career.

Nico Rosberg: I was bullied at school

Nico Rosberg shares he was pinned down and spit on in school as a child, plus explains why it’s so important today to speak up about bullying incidents and how he eventually became close friends with his former bullies.

Nico Rosberg on the blurred line of his father, Keke Rosberg, also serving as his racing manager early on and why Nico sought the challenge of paving his own way and managing himself. Plus, Nico describes the lose-lose environment of childhood tennis matches with his dad.

Nico Rosberg tells of his willingness to befriend Lewis Hamilton in retirement, looks back on their strong friendship as teenagers in karting and how that bond deteriorated as they both pursued a Formula 1 world championship.

Nico Rosberg shares stories of his three years as Michael Schumacher’s Mercedes Petronas teammate, including Schumacher’s intentionally long bathroom break, his bad parking job and seeking respect while in the shadow of the seven-time world champ.

Nico Rosberg on why the 2015 U.S. Grand Prix in Austin, Tex. was one of the most difficult moments of his career and how it spawned a surge in aggression that fueled Nico to seven straight wins. Plus, Nico shares examples of the extra effort in 2016 that helped him win the F1 world championship.

Nico Rosberg explains why Lewis Hamilton’s defiance against Mercedes team guidelines at Abu Dhabi was wrong – even in pursuit of a F1 championship – and how Rosberg hypothetically losing the F1 title to Hamilton would have been like Hillary Clinton losing the U.S. presidential race to Donald Trump.

Nico Rosberg: Why I retired

Nico Rosberg explains his decision to retire from Formula 1 immediately after winning his first F1 championship at 31-years-old, as well as how he informed Mercedes executives and his wife.

Nico Rosberg takes Graham for a drive down a famous stretch of Monaco and the F1 champ shares why it’s responsible for many fond memories. During the taping, Nico is stopped by police for a license plate issue.

Nico Rosberg walks a portion of the Monaco Grand Prix and explains why it’s both the most glamourous and most difficult course within the F1 world circuit.

Nico Rosberg: Wife and I practicing for more kids

Nico Rosberg discusses the highlights and reality of fatherhood, how having a daughter has changed him and shares that he and his wife Vivian Sibold are practicing now to expand their family.

Nico Rosberg on winning at Oscars of the sports world

F1 champ Nico Rosberg on what it means to win the prestigious Laureus Award for “Breakthrough of the Year,” plus commentary from Usain Bolt, Gary Player, Michael Phelps, and Prince Albert II from the red carpet of the award show.

2016 F1 champ Nico Rosberg discusses the sale of the racing league to Liberty Media and how it came at the right time, as previous ownership ran out of ideas. Rosberg also praises former F1 CEO Bernie Ecclestone for his role in taking the sport to where it is today.