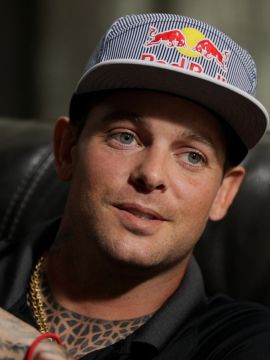 Graham goes In Depth with seven-time X Games medalist Ryan Sheckler as they spend two days in Southern California. The former star of his own MTV reality show looks back on wild years as a teenager at the top of skateboarding, including celebrity-filled house parties and lessons learned while living in front of cameras. Now in his early 30s, he opens up about a drastically different lifestyle, focused on faith, recovery and entrepreneurship. Later, Graham and Ryan head to his private indoor skate park – which doubles as the headquarters for the Sheckler Foundation – and Ryan drops in on a ramp for the first time since his recent ACL surgery.

Skateboarding legend Ryan Sheckler went pro at just 13 years old – winning every contest he entered that year. He said there was no way to prepare, as he was years younger than any other pro on the circuit. The two-time X Games gold medalist looks back on the pros and cons of his youngest professional years, including the strenuous travel schedule that kept him from home and the exciting opportunity to skate alongside the pros he admired. Plus, Sheckler recounts his one year of attending high school, the benefits of learning to wrestle and Tony Hawk’s one request for dropping by a young Sheckler’s birthday party.

Skateboarding star Ryan Sheckler recounts some of the less appealing parts of fame, including when a mentally ill stalker who was infatuated with his little brother was hiding in bushes at his mom’s house, with a large hunting knife and prescription pills in his backpack.

Skateboarding and reality TV star Ryan Sheckler talks of living out his life in front of TV cameras for MTV’s “Life of Ryan,” including painful, forced breakups and learning of his parents’ divorce. Sheckler says the experience was so traumatizing that he refused to date for years after the show ended, but he learned a lot from it.

Former MTV and X Games star Ryan Sheckler tells stories of the wild house parties he would throw when he was just a teenager. He played beer pong with Barry Bonds, Travis Pastrana rode a mini bike through his kitchen and Vanilla Ice showed up for his birthday party. Sheckler says that period of his time was fun, and interesting, but he has moved past it now.

Ryan Sheckler: Cops thought I was jumping to my death

X Games gold medalist Ryan Sheckler recounts some of the craziest jumps of his skateboarding career, including his much talked-about 16-foot kickflip at the Costco gap in Orange County, California, and a 10-foot vertical drop in Taiwan that cause a concerned onlooker to call the police. Sheckler also reflects on the impact of his first X Games gold medal and discusses his potential involvement in the 2021 Tokyo Olympics.

X Games gold medalist and former MTV reality star Ryan discusses the role his mom plays in his life, including the moment he called to tell her he needed help battling alcoholism. Sheckler says the day he went to rehab was the scariest day of his life, because he had to fully surrender to the program. The skateboarding star candidly shares details of a 2020 relapse that started around his 30th birthday and lasted five months, plus how a newfound focus in his Christianity created positive change in his life and an inspiring call from Michael Phelps that helped fuel Sheckler’s sobriety.

Skateboarding star and tattoo enthusiast Ryan Sheckler says that he uses tattoos as an adrenaline rush replacement, for when he’s sidelined from skateboarding due to injury. Sheckler shows off some of his favorite tattoos, tries to remember the origins of one in particular and predicts an 80 percent chance that he’ll tattoo his entire head in the years ahead. He also lists off all of his major broken bones and ligament tears and calls his current ACL recovery the hardest one yet.

Ryan Sheckler: No sex before marriage

Skateboarding star Ryan Sheckler opens up about a different path he’s taking with his girlfriend, as they’re abstaining from sex until marriage. Sheckler says abstinence wasn’t his thing previously, but he’s taking a Christ-based approach and is excited for how it could play out down the road. Sheckler also discusses his relationship with his father and how he coped with his parents’ divorce.

Skateboarding and reality TV star Ryan Sheckler reflects on his evolving relationship with money, including earning his first $100K before he could drive and “wasting” more than $1M with material things like bottle service, penthouse suites and private jet flights. Sheckler also talks of current business interests, including Sandlot Times, Palm Springs Surf Club and a potential deal involving a chain of tattoo shops.

Skateboarding star and philanthropist Ryan Sheckler shares the moment he became “hooked” on helping others – when a young cancer patient named Casey asked to meet him as her single wish via the Make-A-Wish Foundation. Sheckler talks of how Casey’s wish inspired him to create Sheckler Foundation, which has raised $1-2M to-date and works with adaptive athletes in skate parks – including those in wheelchairs and others with prosthetic limbs.

Ryan Sheckler: A tour of my home

Skateboarding and reality TV star Ryan Sheckler offers Graham a tour of his home in Southern California. It’s the second home he’s ever purchased and he says the energy within the home is drastically different from the “chaos energy” of his first home, which he purchased as a teenager. Sheckler shows off his french bulldog Walter and his X Games gold medals, among other things

Ryan Sheckler: Back on a board after ACL surgery (EXCLUSIVE)

Graham and Ryan Sheckler jump into the GMC Acadia and head to his private indoor skate park – which doubles as the headquarters for the Sheckler Foundation – and Ryan drops in on a ramp for the first time since his recent ACL surgery.

Ryan Sheckler: Doctor looked at my knee and laughed

Skateboarding star Ryan Sheckler reflects on his most recent major injury – a torn ACL that he’s combatting with physical therapy sessions. Sheckler says he waited a couple months after the tear before seeing a doctor, who laughed at him when realizing the severity of it all.

Skateboarding star talks of setting goals early on, and treating himself to certain luxuries once those goals were attained.

Skateboarding star Ryan Sheckler shares the moment when he realized he could compete professionally and how his early entry into the highest level of the sport left him without a blueprint to follow.

Graham rides with Ryan Sheckler to his skate park in the GMC Acadia. Sheckler talks about how his park survived during COVID and how he was able to use the time to dig deep and do some soul searching.

Skateboarding star Ryan Sheckler faces a succession of rapid fires questions, including being forced to choose between his career highlight trick at the Costco Gap or El Toro.