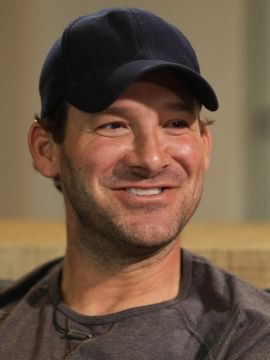 Graham spends the day in Dallas with quarterback-turned-broadcaster Tony Romo, who gives his first interview since signing the contract that made him the highest-paid TV analyst ever. The former Cowboy opens up about his immigrant grandparents’ pursuit of the American dream, his childhood, and how having his own family has impacted him. Romo also addresses his new contract, and receives a gift from New Orleans Saints head coach Sean Payton. Then, Graham and Tony jump into a GMC Acadia and hit a local course for a quick game of golf.

Tony Romo: My father made $500 per month

Tony Romo’s grandparents immigrated from Mexico, migrant workers searching for the American dream. His father, Ramiro Romo, Jr., was in the Navy and a carpenter. Tony talks about how the work ethic of his parents and grandparents shaped him, and how he still relies on their financial advice.

Dallas Cowboys legend Tony Romo talks about the importance of preparation, and the joy he finds in improvement. When the quarterback was a freshman at Eastern Illinois University, he spent the summer working at a marina, and not focusing on football. When he returned to football, he struggled. The call from his coach asking him to move to tight end made Romo rededicate himself to football: every single day of his life he was going to throw the football. That year was a shift for the young player.

Tony Romo on success: You have to fight like heck

On the field for the Dallas Cowboys, or in the studio as a broadcaster, Tony Romo talks about what makes him successful. The former quarterback says he has been blessed with certain gifts, but he also studies those who are successful.

Tony Romo: I try to be John Madden?

On paper or on his phone, former Dallas Cowboy Tony Romo is always taking notes, sketching his blueprint for success so he will know how to get there. Romo used paper notepads throughout his playing career, working out the mechanics of his throw or other plays. As a broadcaster, Romo is taking notes on his phone, documenting successes. He will even mimic other great sportscasters like John Madden and Troy Aikman.

One of Tony Romo’s first broadcasting gigs was actually thanks to his mischievous attitude. When he and his friends would act up in class, his high school teacher would make him read the announcements on the school’s radio station. The former Dallas Cowboy also recalls the made-up book reports he would write about notable sports stars.

After the Dallas Cowboys would win a home game, former quarterback Tony Romo would invite friends and family to his house to celebrate and watch replays of the game. It was in breaking down these wins that Romo had his first taste of being an analyst. Plus, Romo reflects on whether or not he would have continued to play football if he hadn’t been offered a position at CBS.

Former Dallas Cowboys quarterback Tony Romo talks about the video game setup he has on his flights and why he won’t play with his friend and spotter Tom Brewer on the way to football games.

Tony Romo on broadcast start: I was terrible

Tony Romo details how he prepared for his first broadcast with CBS Sports. The former Dallas Cowboys quarterback practiced with broadcasting veterans Jim Nantz and Jim Rikhoff. Romo knew he’d have only one chance to make a first impression with fans so he studied the greats. He comments on his uncanny ability to predict plays as he recalls a turning point in his broadcasting career, the 2018-19 AFC Championship game.

Graham Bensinger hands Tony Romo a check for $10,000 from New Orleans Saints head coach Sean Payton. Romo tells us how his former coach offered the free-agent quarterback a $10,000 signing bonus instead of the $20,000 owner and general manager Jerry Jones was willing to pay.

Tony Romo was given an unprecedented broadcasting deal from CBS Sports. The former Dallas Cowboy quarterback discusses what the contract means to him. He reflects on his first football contract, standing up to Cowboys owner and general manager Jerry Jones, demanding what he was worth.

Former Dallas Cowboys quarterback Tony Romo discusses losing the starting job to Dak Prescott. Romo details the reasons he played through pain and the moment he realized he was slowing down.

Tony Romo tricked his wife into their first date?

Tony Romo tricked his wife, former journalist Candice Crawford, into going on their first date by telling her a group of people were going to a movie. Romo says he knew after two dates he would marry the 2008 Miss Missouri USA. They now have three sons together. Romo talks about the joys of family life and if they are planning to have another baby.

Tony Romo: There is nothing to aging

Former Dallas Cowboy Tony Romo talks about his wife, former Miss Missouri USA, Candice Crawford, their three sons and the life they’ve made together. Plus, Romo tells Graham why he only does a few things well and about the last time he cried. He also talks about his passion and dedication to golf.

Tony Romo recounts a nerve-racking round of golf at the AT&T Pebble Beach ProAm. Romo was partnered with Tiger Woods and found himself in a sand trap when seated next to Woods’ rival, Phil Mickelson, at a dinner Jim Nantz hosted the night before. And, of course, Mickelson made sure Tiger found out.

Former Dallas Cowboys quarterback Tony Romo makes a call on some controversial topics: Football cleats or golf cleats? Beat the Giants or Eagles? And does he want to be remembered as the G.O.A.T. or the B.O.A.T.?

Show host Graham Bensinger hits the links with Tony Romo and pro-golfer Will Zalatoris. The former Dallas Cowboys quarterback has become an avid golfer and plays almost every day.