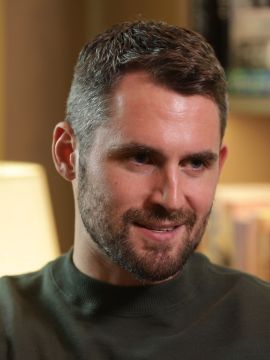 May is Mental Health Awareness Month and the COVID-19 pandemic has only magnified cases of anxiety and depression around the world. On a special episode of In Depth, we’re sharing the personal battles bravely discussed by past guests, in hopes their stories can inspire others to overcome their own Unseen Struggles. Hear from Dak Prescott, Tom Hanks, Lindsey Vonn, Jon Hamm and many more, who reveal their lowest points and encouraging moments of self-discovery.

Dallas Cowboys quarterback Dak Prescott struggled with anxiety, depression and sleeplessness during the initial days of the COVID-19 pandemic. One night though, he slept, the best sleep he’d had in a long time. But he woke up to the worst news: his older brother Jace had taken his own life. Prescott acknowledges his brother struggled while watching their mom fight colon cancer. That isn’t how he wants Jace to be remembered. Plus, an emotional Tad Prescott on how Jace’s death has impacted his family.

Jon Hamm on struggling with depression

Jon Hamm opens up about losing his mother at a young age to colon cancer and goes on to recount the later losses of both his grandmother and father. He also reflects on his struggles with depression following their deaths and the profound impact therapy had on his mental health

George Foreman: Was Rumble in the Jungle fixed?

George Foreman discusses his controversial loss to Muhammad Ali in the Rumble in the Jungle, how he’s opted to drop the excuses and move on and why he regrets missing precious time with Ali due to their fight history.

John McEnroe recalls a couple anger-fueled incidents from his pro tennis career and reflects more broadly on the benefits both of anger and anger management therapy.

Jerry West candidly reflects on his brother’s death, his battle with depression and outlets to overcome low periods, including writing his autobiography, West by West: My Charmed, Tormented Life.

Kevin Love reached a low point in his mental health in 2012, while playing for the Timberwolves. Multiple injuries kept him from the court, and he retreated inside, while his anxiety and depression grew without the outlet of basketball. Love admits that he began planning his suicide. In fact, he still thinks about committing suicide. He often feels like a fraud, as though he isn’t successful enough. Love talks about how he moved forward, and how he continues to work on his mental health now. Plus, Love on the impact of the HBO documentary Come Inside My Mind, about the late actor Robin Williams and his suicide.

Olympic skier Lindsey Vonn says she doesn’t ski anymore. She can’t, her body won’t hold up to the speed, and going slow would be like driving a Prius after Formula 1, she says. So she stays away from it to keep herself safe. But in doing so, she is developing a life beyond skiing, spending time with her family, friends, and fiancé, hockey star P.K. Subban, and developing her production company, Apres Productions. This is in sharp contrast to her life at the peak of her career, which she said was very lonely.

Billionaire philanthropist Ray Dalio’s son, Paul, was in a Los Angeles hotel when he experienced a psychotic episode, was jailed and ultimately diagnosed with bipolar disorder. Dalio details the subsequent three years of working to help his son, a filmmaker, cope with his illness and find a path. Dalio’s longtime friend and co-CIO, Bob Prince, recalls Dalio leaving meetings to be with Paul during this time. Dalio also recounts the moment he saved Paul from committing suicide. Paul’s film, “Touched with Fire,” recounts his struggle with the disorder.

Alex Smith reflects on the 2008 death of his best friend, David Edwards, including the many emotions that followed and how the traumatic event shifted Alex’s perspective.

Lindsey Vonn: I saved a girl from suicide

An emotional Lindsey Vonn opens up about using her sport, and her position as a star athlete, to help others. The Lindsey Vonn Foundation provides scholarships and programming for education, sports, and enrichment programs for young people. Vonn recounts connecting with one girl who attended the Strong Girls camp, and later wrote to Vonn, saying prior to camp, she self-harmed, and wanted to kill herself. The camp and Foundation helped her, and Vonn says that made all of her career struggles worthwhile. Plus, Vonn talks about “career day,” a program she developed during quarantine to help mentor and inspire young people.

Kevin Love’s panic attack: I was afraid for my life

In November 2017, Kevin Love suffered a very public panic attack during a game. During a huddle, Love tried to catch his breath, but he couldn’t and his heart was racing. Love was sure he was having a cardiac event, and went to the Cleveland Clinic. It was then he admitted that he needed help. Love details what had kept him from getting help in the past, including gender stereotypes and stigma surrounding mental health. Plus, Love opens up on how therapy helped him become unapologetically himself, and how his grandmother’s sudden death impacted him.

Oscar De La Hoya shares that being exposed for his alcohol addiction was the lowest point in his life and he contemplated suicide “many times.”