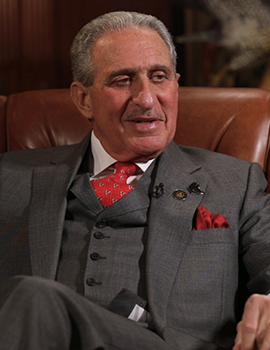 Arthur Blank – owner of the Atlanta Falcons and co-founder of The Home Depot – invites Graham to Atlanta for two days to share pivotal moments from his self-made rise to billionaire status and tour the best-in-class stadium he built for the Atlanta Falcons. Blank, quarterback Matt Ryan and members of the Falcons’ brass discuss coping with Michael Vick’s conviction and coach Bobby Petrino’s surprise abandonment. Plus, Blank reflects on both creating and stepping away from The Home Depot.

The Home Depot co-founder, Arthur Blank, shares anecdotes and real-world stories illustrating his approach to growing a corporation and motivating its employees, plus shares the instances that would make him furious

Arthur Blank: I got fired, then started Home Depot

The Home Depot co-founder, Arthur Blank, shares the story of when he and Bernard Marcus were simultaneously fired from their executive roles and how it served as the impetus to create The Home Depot

Arthur Blank shares the story of approaching Ross Perot with an opportunity to buy a 50 percent stake in Home Depot for $2 million and Perot’s criticism of the Home Depot team’s cars, clothes and facial hair. Blank points out that the $2 million investment Perot declined would now be worth roughly $90 billion.

Arthur Blank: I was fired from Home Depot

The Home Depot co-founder, Arthur Blank, candidly shares details of an impromptu meeting in an airport hangar when he was asked to step down, the company’s short-term mistake of replacing him with Robert Nardelli and how the brand righted its wrongs and returned to a values-based business culture.

Business mogul, Arthur Blank, reflects on his modest upbringing and how his father’s surprise passing shaped his brother, mother and himself, who all stepped up to support the family business

Atlanta Falcons owner, Arthur Blank, shares details of his discussion with then NFL commissioner Paul Tagliabue as Blank was purchasing the franchise and how Blank applied his experiences catering to The Home Depot customers to attract more Falcons fans to attend home games

Atlanta Falcons owner, Arthur Blank, offers his insight into the NFL’s consideration to move a franchise to Las Vegas, including the question of whether the Vegas community can sustain a franchise and the critical need to keep any gambling interests separate. Blank also looks back on Stan Kroenke moving the Rams out of St. Louis and the NFL’s stance on always encouraging franchises to stay

Atlanta Falcons owner, Arthur Blank, reflects on Roger Goodell’s tenure as NFL commissioner – including the increase in NFL issues and concerns the league is addressing – and gives Goodell a high grade for his aggressiveness

Falcons President and CEO, Rich McKay, reflects on Blank’s tight bond with Vick. Plus, team owner, Arthur Blank, looks back his experiences surrounding Michael Vick’s initial dogfighting allegations and eventual conviction, including his communication with Vick before and during his prison sentence.

Atlanta Falcons President and CEO, Rich McKay and Falcons owner, Arthur Blank, discuss former head coach Bobby Petrino and his surprise departure during the regular season. McKay says the franchise was pleased with Petrino’s abrupt exit and that it was the right thing to happen. Blank says the Falcons were already planning to release Petrino at the end of the season, as he posted a 3-10 record and received several complaints from veteran players.

Atlanta Falcons owner, Arthur Blank, pinpoints several reasons he and his team opted to build Mercedes-Benz Stadium in West Atlanta, including its history as the birthplace of Martin Luther King Jr., a focal point of the civil rights movement and its accurate representation of Atlanta’s unity and diversity.

Atlanta Falcons owner, Arthur Blank, offers Graham a walking tour of the new home for his franchise: Mercedes-Benz Stadium. Blank discusses the trademarks of his $1 billion stadium, including “the most complicated roof design in the history of the world,” sustainable water usage, a massive, halo video screen and affordable concession prices

Atlanta Falcons quarterback, Matt Ryan, discusses his first meeting with franchise owner, Arthur Blank, during the NFL combine and later at Boston College, plus offers insight into his close relationship with Blank and praise for the his vast contributions to the city of Atlanta

Steve Cannon, CEO of AMB Group (the parent company that owns the Atlanta Falcons), outlines the Falcons’ current shortfalls and his push to help ignite a fanatical fanbase