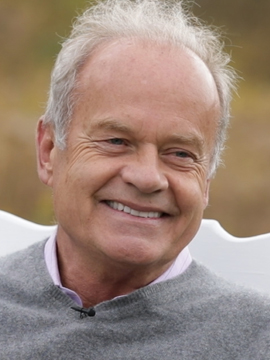 Award-winning actor Kelsey Grammer, best known for his roles in Cheers and Frasier, tells Graham about the reboot of his popular character. Grammer talks family, the importance of his on-screen father-figure, coping with the murder and loss of his real-life father and sister, and his four marriages, including the abuse he suffered before finding happiness with his current wife. Plus, Grammer takes Graham on a tour of his never before seen property in the Catskill Mountains, shows off the tavern for Faith American Brewing Company, and discusses the impact surfing has had on him.

Surfing was Kelsey Grammer’s life in junior high and high school. The award-winning actor details how he grew as surfer, both mentally and physically. He explains the spiritual impact surfing had on him, and how it helped him find peace. Plus, he details the moment he felt closest to God.

Kelsey Grammer learned to sail at the age of nine in Atlantic Highlands, New Jersey at the Atlantic Highlands Yacht club. He fell in love with the sport, and dreamed of owning a sailboat one day. He fulfilled that dream when he was 29, taking out his first loan to buy the boat, which he owned for 30 years. Plus, he recalls the question his wife, Kayte, asked him about the boat that caused his mind to race.

Kelsey Grammer: I was struck by lightning

Kelsey Grammer began riding his friend’s motorcycle at the age of 12, and the young boys got scuffed up, but it didn’t stop him from riding. Grammer has criss-crossed the country on motorcycle, and details the most pivotal ride he took.

Kelsey Grammer gives Graham a tour of his newest venture, Faith American Brewing Company. Grammer founded the brewery in 2015, and describes to Graham some of the challenges he has faced along the way. Grammer opens up about his hopes for the company’s future, and shares a beer with Graham. Plus, they take in the scenic vistas of Grammer’s Catskills estate.

Kelsey Grammer describes his first experience with Shakespeare in the 7th grade following the death of his grandfather, Gordon. Grammer read Julius Caesar and connected with the emotionally detached Brutus. Grammer, wanting to be strong for his family, attempted to embody Brutus’s stoicism. Later in life, Grammer again called on great writers and story-tellers following his expulsion from Juilliard.

Kelsey Grammer: The Art of Acting

Award-winning actor Kelsey Grammer says that legendary actor Jack Benny’s key to success, “play up to the audience,” has always impacted them. Grammer used Benny’s words as a rallying cry for his own work, choosing to always assume the audience would understand his work, or be ahead of him. All people have an intellect that connects them, Grammer says, and the moment an actor can recognize that is ‘a little bit like heaven.’ Plus, he details how he would keep his craft fresh when playing his long-time character, Frasier.

Kelsey Grammer went to Juilliard on a scholarship, but still had to work two jobs to make it through the year. He would work nights at a hotel, and then immediately go to his job working construction. Grammer still struggled to make ends meet, even sleeping in the park for a few weeks. He describes the financial lessons he learned from that time, and the moment he realized he had to quit working if he was going to make it as an actor.

Kelsey Grammer to castmate: F*ck You!

Award-winning actor Kelsey Grammer describes what he calls “football acting,” with the legendary Christopher Plummer, which led to a physical altercation, a broken foot, and a great experience. Plus, he details how Christian Slater’s mom helped his career.

Kelsey Grammer was freshly expelled from Juilliard when Edith Skinner referred him to manager Mort Skinner. Skinner quickly sent Grammer to a casting session for a ‘movie about space.’ Grammer found himself auditioning for Star Wars, to be a ‘gunslinging-type of guy.’ Plus, Grammer details auditioning for Cheers, and getting no laughs.

Award-winning actor Kelsey Grammer says one of the greatest gifts from his long-time run as Frasier Crane was having a father and brother in fellow actors John Mahoney and David Hyde Pierce. Grammer details how family scenes were difficult to get through, and what he valued in his TV family, having not spent much time with his actual father before his death.

Kelsey Grammer says his grandfather, Gordon, was a man of service, and made a major impact on the award-winning actor as a young man. Gordon’s death when Grammer was 12 years old deeply impacted him. Grammer was left with the sense that he was going to be alone, but that he would survive. Plus, Grammer recalls visiting his father prior to his death, and when the murder really sank in.

Kelsey Grammer describes turning to alcohol, cocaine, and dangerous behavior after the murder of his younger sister, Karen. The award-winning actor would walk the streets of Manhattan, looking for trouble, but felt that something was protecting him when he found none. Grammer says he was carrying his grief, and describes how he turned it off. The men convicted of her murder originally faced the death penalty, but ultimately ended up serving life in prison, being up for parole each year. Grammer returns to Colorado Springs each year to speak against the remaining offender’s release.

Kelsey Grammer has been married four times, but he says the first three were to the same person; he would often find himself attracted to people who were not doing well. Grammer’s second marriage was rife with abuse, physically and emotionally, and he ended up with a black eye, and having a gun fired at him. He said he often felt the abuse was his responsibility, and that he felt if he was better, he could fix the relationship. Grammer explains why he often felt that he was not good enough, and how he learned to move past that feeling. Plus, he describes his relationship to Kayte, a woman 26-years his junior, but with whom he says he is ‘really well matched.’

Kelsey Grammer had just been stand-up paddling when he started feeling dizzy, and then a crushing pain led him to believe he might be having a heart attack. Grammer was in Hawaii, and he had to wait an hour and a half for an ambulance. His heart suffered some damage in that time, and he has had to work hard to recover. He recalls learning the procedure that would save his life might also kill him, and declaring he wasn’t ready to die.

Award-winning actor Kelsey Grammer opens up about how he learned to be a father, despite having limited paternal role models. Grammer details the lessons he has gained from fatherhood, and how he still hopes to grow his family. Plus, he describes his relationship with his eldest daughter, Spencer.

Kelsey Grammer describes acting after his penultimate character Frasier Crane, was finished. Grammer portrayed the psychiatrist for 20 years on both Cheers, and then as the titular character for spin-off Frasier, and details the possibility of a reboot despite his previous protestations. Plus, he tells how his Simpson’s staple, the murderous and erudite clown Sideshow Bob, came to be.