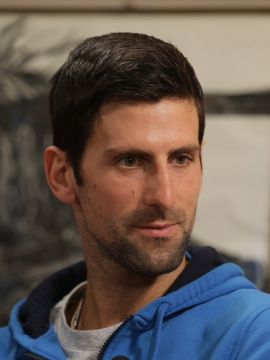 Graham spends two days in Belgrade, Serbia, with No. 1-ranked tennis player Novak Djokovic. The 17-time Grand Slam champion eyes the all-time record, discusses how war has shaped him and reveals how his marriage proposal almost literally went up in flames. Djokovic shows Graham around the city with stops at his tennis center, childhood playground and local gym. Plus, Graham spends time with Djokovic’s wife, mother, friends and family to learn what it is like to support one of the greatest athletes of all time.

Novak Djokovic: My diet and the doctor

Tennis great Novak Djokovic was struggling with his health and at a low point in his career when Dr. Igor Cetojevic saw him playing in the 2010 Australian Open. Cetojevic reached out to Djokovic’s parents and offered to work with the athlete. Djokovic was introduced to biofeedback and quantum physics. They adjusted his diet, removing gluten, sugar and dairy. Djokovic said he felt immediate relief. Plus, Djokovic talks about his strict, clean diet.

Novak Djokovic fell in love with tennis when he was just four years old, watching Pete Sampras on television and playing on courts built outside the restaurant his parents ran. Djokovic started playing, and by the time he was six, he decided he would be the number one tennis player in the world. He was just 10 years old when his father asked him to choose between tennis, skiing and soccer. Djokovic’s family had a long tradition of being involved in competitive skiing, but when their son chose tennis, they supported him. Djokovic talks about the sacrifices his parents made for him to play tennis competitively and how they tried to hide hardship from him.

Finances were tight for the 14-year-old Novak Djokovic and his family. So when he was approached by tennis agents and offered the opportunity to switch nationalities, play for England and alleviate some of the hardship on his parents, they seriously considered it. But Dijana Djokovic said she knew Novak would not play for England with his whole heart as he did for Serbia.

Novak Djokovic: Wimbledon was a dream

Tennis great Novak Djokovic describes the moment he knew he had arrived and the motivation that got him there.

When you play at the top of your sport, there are bound to be moments where anxiety, negative thoughts, or fear creep in. Tennis champion Novak Djokovic tells about the methods he uses to quiet his mind and come through in those tough moments.

Novak Djokovic was eliminated from the Rio Olympics in the first round. The tennis champion describes the moment as the biggest heartbreak of his career and tells how he is using that experience to prepare for his next Olympic competition.

Djokovic on Federer chants: I trick mind into hearing my name

Novak Djokovic says the media may get it wrong, the adoration and respect he gets at home are not what he experiences at stadiums around the world. In fact, he has even learned a trick to help him focus and feel powerful, pretending that crowds are chanting his name. Djokovic says he tries to just be his most authentic self. Plus, Djokovic talks about what he has learned from Rafael Nadal and Roger Federer, as well as other opponents. But did Novak’s close friendship with Nadal end once Novak started winning?

Will Novak Djokovic have the grand slam record?

Tennis champion Novak Djokovic finds his confidence from the clarity derived from the joy he gets playing tennis, but acknowledges that his success has come with sacrifices to his family life. At the same time, he says his path chose him and he believes he can win the most grand slams. Plus, Djokovic reflects on the longevity of his career and whether or not he will still be playing at 40 years old.

Sitting in his grandfather’s apartment in Belgrade, Serbia, Novak Djokovic recalls living through not one, but two wars. The bombings over his home continued for so long that the young Djokovic became used to the sound of planes overhead. Djokovic recounts some of the more harrowing moments and how he used the experience to fuel his success.

Arguably one of the greatest tennis players of all time, Novak Djokovic discusses his biggest weakness. Novak says he has trouble understanding things at a deeper level. He says the macho nature of sports might prevent men from being vulnerable, but that he has found it to be liberating.

Novak Djokovic and wife Jelena recount their engagement, an elaborate hot air balloon proposal that almost got too hot.

Novak Djokovic is already the father to two small children, but says he still wants to grow his family. Djokovic talks about raising his children and balancing the opportunities his success has given them with wanting to keep them motivated.

Novak Djokovic on martial challenges: Growth as a couple

Over a two-year period Novak Djokovic won 158 matches, including six majors, one of the most dominant winning streaks in tennis history. But it came to an end and Novak was left with the realization that his happiness had been dependent on his success on the court. Djokovic opens up about how he allowed his profession to stunt his emotional growth and impact his relationships, including his marriage.

Novak Djokovic: Parents taught me to save

Novak Djokovic says his parents and the environment he grew up in helped him learn to be smart about his money. He says his circumstances taught him that you must value money with respect because you have to work hard to earn it.

Tennis great Novak Djokovic recalls words of encouragement from the late NBA star Kobe Bryant. Djokovic opens up about the impact Bryant’s death had on him.

Novak Djokovic’s mom: Sacrificed our other kids for Novak

Novak Djokovic’s mother, Dijana, discusses the sacrifices her family made in order to fund Novak’s success, including not being able to invest in her other two sons. Plus, Dijana talks about raising Novak and his brothers through two wars.

Novak Djokovic’s mother, Dijana, gives Graham a tour of the trophy room at the Djokovic family restaurant. As she shows off paintings and memorabilia from her son’s career thus far, she looks towards the future, weighing in on whether or not Novak will still be playing when he is 40 and how long he will stay number one.

Jelena Djokovic, wife of Novak Djokovic, lives her life for her spouse’s career, just like many partners of professional athletes. Jelena talks about the struggles of finding balance between honoring herself, mothering her children and supporting her husband. She became so taxed by her responsibilities that she left Novak while he was playing at Wimbledon to embark upon a spiritual journey. Plus, Jelena opens up about her anxiety raising her children in the shadow of their father.

Following a bad loss, Novak Djokovic told his family he was quitting tennis. His wife, Jelena, recalls hearing the news and what it took to get Novak back on the court.

Novak Djokovic: Join me on court

Graham steps onto the court with tennis great Novak Djokovic and his coach Marian Vajda. Djokovic breaks down the changes he’s made in his serve over the years and lets Graham see the improvements first hand.

Graham serves up a round of rapid fire questions to tennis star Novak Djokovic.

Graham hits the gym with Novak Djokovic to check out the rigorous training routine that keeps the tennis star playing at the top of his game.

Novak Djokovic, his brother Djordje Djokovic, and childhood friend Neven Markovic tour Novak’s childhood haunts in his native Serbia, including the tennis club he grew up in.

Novak Djokovic: I’m not looking to be the center of attention

Novak Djokovic survived two wars as a child. He gives Graham a tour of the shelter where he and his family waited out night after night of bombings in his native Serbia.