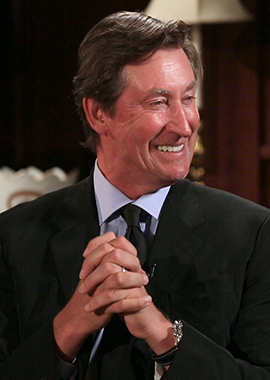 Wayne Gretzky discusses his passion for all things hockey-related and how his love for the history of the game comes through in his latest book, 99: Stories of the Game, which was released in October 2016

Wayne Gretzky shares a few of the rituals that came alongside a lifetime of competition, including a unique approach to getting dressed, unconventional pregame meals and a knack for noticing the most minute differences in his equipment

Wayne Gretzky shares some of the unique hockey drills his dad created to improve puck control and awareness, plus anecdotes of how Wayne’s passion for hockey has been present ever since he was first introduced to the sport

Wayne Gretzky on the support of his parents to help him capitalize on natural talent, why the Edmonton Oilers would ask his dad to attend games and his dad’s long recovery process from a brain aneurysm in 1991

Wayne Gretzky on his humble upbringing, family sacrifices and how his dad helped maintain that humility despite Wayne’s first pro contract

Wayne Gretzky: Mario Lemieux is a better scorer than me

Wayne Gretzky on building chemistry with Mario Lemieux during the 1987 Canada Cup, why he told Lemieux that he needs to be the shooter on future two-on-one attacks and how it translated into one of the greatest goals Gretzky was ever a part of

Wayne Gretzky on the pregame pressure to finish his push and score 50 goals, plus why he made a point to call his dad back home after the historic, five-goal performance before talking to members of the media

Wayne Gretzky: I thought I was untradeable

Wayne Gretzky: I proposed to wife over phone

Wayne Gretzky on meeting his wife, Janet, proposing to her over the phone and the Edmonton wedding attended by celebrities and thousands of fans

Wayne Gretzky shares how he is so emotionally invested in Dustin Johnson’s tournaments that it hurts his stomach and he has to turn away at times, plus how he witnessed a major shift in Dustin’s level of play, which Wayne attributes to a Dustin missing the 2013 Presidents Cup

Wayne Gretzky offers his take on the difference between a great athlete and the best athlete and points out how he had played to his strengths, even though they weren’t the typical attributes of a hockey star

Wayne Gretzky: I wish I could still play

Wayne Gretzky on retiring at 39 years old, turning down an unconditional offer for $1 million and the missing the irreplaceable high hockey provided. Plus, Wayne discusses shifting his focus towards rooting on the next generation.

The #99s on ice: JJ Watt’s request for Wayne Gretzky

Wayne Gretzky says he’s up for JJ Watt’s request to skate together, under one condition