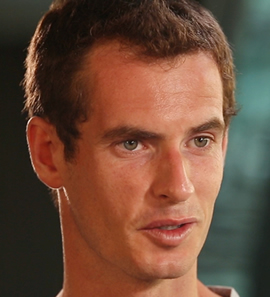 Graham Bensinger recently sat down with British tennis star, Andy Murray, in Miami, Florida.  As he rebounds from off-season back surgery, the 2012 Olympic gold medalist and two-time Grand Slam champion took time out from his busy training schedule to discuss his recent turnaround on the professional tennis circuit, including the end of a 77- year drought of British men’s singles titles at Wimbledon.  Murray also shares a tragic moment from his childhood, when a gunman walked into his primary school in Dunblane, Scotland, and killed 16 fellow students and one teacher.

Murray was at school when the gunman walked into the school’s gymnasium and began shooting at a class of five and six-year-olds. After killing 16 children and their teacher, he turned the gun on himself. The tragedy is still difficult for Murray to recall.