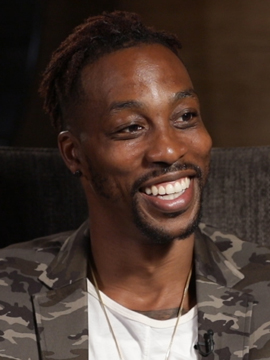 Graham spends the day with NBA player Dwight Howard at his Atlanta-area estate. The all-star discusses his career ascension, from his high school state championship and going first overall at the 2004 NBA Draft, to winning the NBA Dunk Contest and upsetting LeBron James and the Cavs en route to the 2009 NBA Finals. Dwight also opens up about his family, from his state-trooper father to his five children. Plus, Graham tours Dwight’s 35,000 square-foot mansion, and hears his best celebrity impressions.

Dwight Howard: My ego had to die

Dwight Howard shares his insightful perspective into gaining, losing and regaining confidence as a top NBA talent. He opens up about the criticism that drained his confidence upon leaving the Lakers and heading to the Rockets, then learning to live in the moment and kill his ego.

Dwight Howard offers introspective thoughts regarding multiple instances of trusting the wrong people with his money early in his NBA career, saying he doesn’t regret those decisions as they led to lessons learned that helped him get to “the next level.”

Dwight Howard discusses his love of movies, practicing lines in the mirror, doing voice acting. Plus, he tells who is acting role model is, and how he selected his first producing project.

Dwight Howard discusses his goals of changing public perception and helping to create a world where people can freely express their true selves without fear and without feeling obligated to justify or explain their motivations. Plus, he talks of the importance of donating time over money.

Dwight Howard talks about family impact, including getting emotions from his mom and a lesson during a ride-along with his father – a Georgia State Trooper. Later, Dwight offers a snapshot of his emotional temperament by sharing a list of movies that brought tears, including “Finding Nemo,” “The Notebook” and “A Star is Born.”

Dwight Howard opens up about his drastically different diet today vs. his earlier days in the NBA, including quitting candy, fasting for a month and dropping 30 lbs.

Dwight Howard goes into detail explaining how stepping into NBA stardom at 18 was like a kid walking into a candy store with freedom to indulge as much as he wants. Dwight says he has no regrets and that the indulgences early on were a part of growing into who he is today.

Dwight Howard shows off his $8.8M Atlanta-area mansion: A spectacular estate with 35,000 square feet, five kitchens, 20 HVAC units, three laundry rooms and a 14-car garage. Dwight’s mansion tour includes a look at his pet snakes, inside his garage, some of his favorite memorabilia and a quick 1-on-1 game on his home court.

Dwight Howard: How am I a bad teammate?

Dwight Howard questions the media’s attacks on his character as a teammate and reports of negative presence in past locker rooms, and especially how that contradicts his recognition as Teammate of the Year from the Atlanta Hawks and multiple Community Assist Awards.