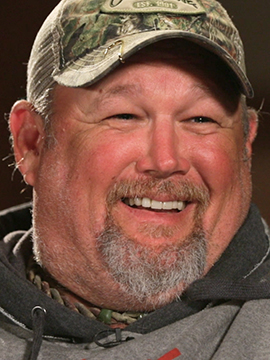 Graham meets up with Dan Whitney – better known as Larry the Cable Guy – at the AT&T Pebble Beach Pro-Am to talk with the popular comedian in between rounds of golf. Whitney discusses his passion for a variety of sports, prank calling his way into the national spotlight and why his casting as Mater in Pixar’s Cars still brings tears of joy. Graham also talks with fellow celebrity golfers, including Aaron Rodgers and Wayne Gretzky, who share why they’re fans of the blue collar comic.

Larry the Cable Guy: Will joke piss off Peyton Manning?

Larry the Cable Guy shares how he’s frequently inspired to create new jokes – like a new one on Peyton Manning’s forehead – and explains how the progression of bringing a new joke into his primary arsenal resembles a baseball team’s farm system.

Larry the Cable Guy reflects on the evolution of his comedy material as he got married and had kids, and why he changed course and felt compelled to limit the lies within an act.

Dan Whitney reveals the origins of Larry the Cable Guy and how it all started with his prank calls to radio stations, when he was in character as Iris – a little old lady who lived in Boca.

Larry the Cable Guy describes himself as a linguistic chameleon and details how he first got comfortable using a southern accent.

Larry the Cable Guy: I owe career to comic who tanked

Larry the Cable Guy looks back on his first attempt to perform stand-up comedy during an open mic night in West Palm Beach, Florida, and why he nearly bailed on the whole thing.

Larry the Cable Guy looks back on part the grit it took to eventually earn his invite to join the Blue Collar Comedy Tour, including calling 27 radio shows each week in an effort to boost ticket sales at upcoming shows and staying the course for six years, until his big break in Nashville.

Larry the Cable Guy walks through the financial gains that came with an exponential increase in his audience size when he joined Jeff Foxworthy on the Blue Collar Comedy Tour, and how he never dreamed comedy would earn him the amount of money it has.

Larry the Cable Guy emotionally recounts the moment he realized he landed the role as Mater in Pixar’s “Cars,” including why it remains the greatest thing to ever happen to him and how it was the culmination of everything he’d worked for up until that moment.

Larry the Cable Guy on growing up with his “old school” father and how he learned comedic timing to deflect from stressful situations and spankings. Larry also looks back on how he made thousands of dollars selling pigs as a nine-year-old and when he tried to hide and raise three baby pigs in his bedroom closet.

Larry the Cable Guy tells of when he and his wife were searching for answers regarding their son’s hip dysplasia and how the majority of information available was specific to dogs, not humans. He shares that this deficiency was a primary driver to partnering with Arnold Palmer Hospital for Children to form the International Hip Dysplasia Institute.

Larry the Cable Guy on his fandom and commitment to watching Nebraska Cornhuskers football games, including scheduling shows around Husker home games and calling in to a Nebraska comedy club and asking them to put the radio up to the phone.

Larry the Cable Guy shares stories of his baseball talent, including once hitting 95 mph with a fastball during a college baseball game, then recently trying to rekindle that spark when messing around at batting practice with the Nebraska Cornhuskers.

Larry the Cable Guy: Check out my golf skills

Larry the Cable Guy offers Graham behind-the-scenes access to the AT&T Pebble Beach Pro-Am and explains why he switched from hating to loving the game of golf.

Larry the Cable Guy: Packing on 50 lbs every winter

Larry the Cable guy shares details of how his weight fluctuates by 50 pounds between winter and summer, constant workouts and how he can’t quit his high-sugar diet.