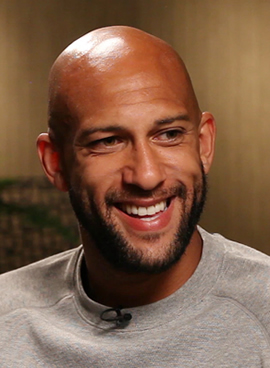 Graham sits down with Tim Howard in Jacksonville, Florida, as the U.S. Men’s team prepares for the World Cup. The Team U.S.A. goalkeeper speaks openly about the team’s chances in the competition, as well as Landon Donovan’s surprising absence from the World Cup roster. Howard remembers growing up with Tourette’s, his efforts to hide it from friends and teammates, and how the condition continues to affect him right up to gameplay. He also reflects on his time playing for both Manchester United and his current team, Everton, and tells Bensinger what he has planned when he retires at the end of his current contract.