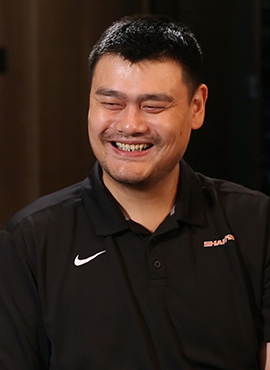 Graham travels to Shanghai to sit down with newly-inducted Hall of Famer, Yao Ming, in his hometown. The eight-time NBA All Star reflects on his latest accolade as a Hall of Famer, responds to those who criticized his election and shares favorites memories of playing against fellow big man, Shaquille O’Neal. Yao, who now owns the Chinese Basketball Association (CBA) team he grew up playing for – the Shanghai Sharks – also goes in depth about changes needed in the CBA to grow the sport and his full-time practice scheduling as a young teen. Plus, Yao takes Graham to shoot hoops at the schoolyard where he first took up the sport.

Yao Ming: I’m too young for Hall of Fame honors

Yao Ming: If I failed, I failed my country

Yao Ming discusses the pressure of leaving China to play in the NBA and thoughts of backing out, even as he was boarding his first flight to Houston

Yao Ming addresses some of the athlete and sport selection issues China is working through, including selecting kids for the basketball program based on their parents’ height

Yao Ming on injuries: My left foot is forever numb

Yao Ming on wanting a low profile, no drama retirement announcement and what he misses most from his playing days

Yao Ming on the destructive impact of hunting animals and killing sharks for unnecessary consumer goods, including rhinos and elephants

Yao Ming: Dikembe Mutombo taught me to give back

Yao Ming on a lesson from Dikembe Mutombo, creating The Yao Ming Foundation, building 17 schools and bringing isolated students together through basketball

Yao Ming on how he wishes he could walk down the street with his family without being recognized and how he would go back and tell his younger self to enjoy the average, everyday lifestyle

Yao Ming: I’m grateful Shaq was past his prime

Yao Ming says that the first time he played against Shaquille O’Neal was the most memorable, as Shaq’s performance had just began to decline and Yao’s was rising

Yao Ming and Graham Bensinger head back to the school where Yao learned the game and Yao discusses the embarrassment of missing a shot, given his reputation as the son of two professional basketball players

Yao Ming shares his fears of getting hurt by elevated physical play in the NBA and fighting through a bad first game; taped in 2011

Yao Ming describes the locker room mix up over a Mandarin word that sounds like an English racist word and the cultural differences that come with drinking alcohol; taped in 2011

Yao Ming: I wish I had NBA championship

Yao Ming reflects on how he is still working to fulfill basketball goals in China, how the Houston Rockets franchise was the right team for his nine-year career and how the team became a part of his identity; taped in 2011

Yao Ming details his serious injuries, including reconstructive foot surgery in 2009; taped in 2011

Yao Ming: My fight to get to the NBA

Yao Ming explains some of the difficulties and frustrations involved in his eventual path to the NBA; taped in 2011