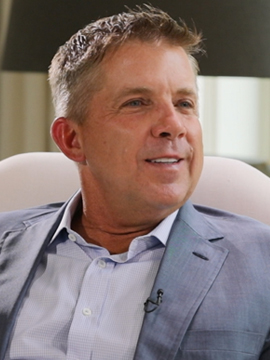 Graham spends two fast-paced days with Saints head coach Sean Payton in New Orleans and aboard a chartered flight with the coach to Dallas to catch his son’s high school football game. Coach Payton discusses his career journey to New Orleans and his role in helping a city rebound from Hurricane Katrina’s devastation. He offers new details and an introspective discussion on the Bountygate scandal that left him exiled from his team for a year, plus fond memories of coaching his son’s sixth grade football team while serving the suspension. We also talk with key figures in Coach Payton’s life, including Drew Brees, Jonathan Vilma, Bill Parcells, Saints GM Mickey Loomis and Payton’s daughter Meghan.

Saints coach Sean Payton looks back on his first interview on the coaching side of football – when applying for a position as a graduate assistant at UNLV – and his incorrect answer to a question from then head coach Wayne Nunnely.

Sean Payton: Giants coach threw me under the bus

Saints coach Sean Payton looks back on his career stop with the New York Giants, including the time his plan to take a knee just before halftime was overruled by head coach Jim Fassel – in 2002 against the Arizona Cardinals – and Fassel’s unethical response when questioned by the media.

Saints head coach Sean Payton addresses difficulties managing the work-life balance across his NFL coaching career. Payton says NFL coaching positions are consuming and talks of sleeping at the office in order to erase commute time and catch an extra hour of sleep.

Saints head coach Sean Payton shares the story of general manager Mickey Loomis recruiting him to New Orleans, despite Payton’s interest to accepting a position with the Green Bay Packers. Payton goes on to discuss the Saints’ first home game at the Superdome after Hurricane Katrina. Plus Drew Brees and Loomis reflects on the importance of winning that first home game and the steps Payton took to prepare his team.

DESCRIPTION: Saints coach Sean Payton explains the team’s surprise when Reggie Bush became available for their second overall pick during the 2006 NFL Draft and how Bush’s marketing agent at the time – Mike Ornstein – tried to orchestrate a trade to keep his client out of New Orleans.

Sean Payton on Bountygate: NFL was trying to break me

Saint coach Sean Payton looks back on Roger Goodell and the NFL’s 2012 decision to suspend him for a year, among other Saints players and staff.

Saints coach Sean Payton talks about his year as an assistant coach for his son’s sixth grade football team, including how it served as a mental escape from the stress of his NFL suspension and when he called Bill Parcells for help game planning for the team’s championship game. Plus, Parcells looks back on those conversations and how he could tell Payton was enjoying his time coaching youth football.

Sean Payton looks back on the Saints 2010 Super Bowl win, saying the experience was 100 times greater than expected. Payton recalls difficulties finding his family during the celebration and the downside of closing the book on a championship season.

Saints head coach Sean Payton on recruiting Drew Brees to New Orleans, including driving Brees around the city, getting lost and ending up in one of the hardest hit neighborhoods from Hurricane Katrina. Plus, Brees shares his thoughts on what he was looking for in a franchise and the real reason he and his wife decided they were moving to New Orleans.

Tony Romo asks his former Cowboys quarterback coach (and now Saints head coach) Sean Payton about a hypothetical scenario where Romo was traded to the Saints, plus what Payton would’ve done differently when with the Cowboys, supporting then head coach Bill Parcells.

Saints quarterback Drew Brees on play calling along the same wavelength as his head coach of more than a decade, Sean Payton. Brees goes on to share examples of Coach Payton as a master motivator with a knack for getting the best from his players.

Saints coach Sean Payton showcases a strong impersonation of the Patriots’ Bill Belichick and explains why he pulled out the impersonation when addressing his team before a big game against the Pats in 2009.

Saints head coach Sean Payton and his daughter Meghan discuss their unique positions as a head coach and aspiring sideline reporter assigned to cover Saints’ preseason games for the local FOX affiliate. Later, Payton shares his broader opinions on the pros and cons of the media’s access to his team.

Legendary NFL coach Bill Parcells looks back on his days at the Cowboys with Sean Payton as an assistant coach, including their differing coaching philosophies and his advice for Payton as he left Dallas to take on a head coaching role with the New Orleans Saints.

Former New Orleans Saints Pro Bowler Jonathan Vilma looks back on his time playing for Sean Payton, which he calls his career-defining moments, including when Payton took a chance on Vilma by bringing him to New Orleans and when Payton offered the highest praise to Vilma during a NFC Championship celebration.

Bill Parcells talks about his conversations with Sean Payton during Payton’s year-long suspension from the NFL after the Saints’ Bountygate allegations, plus Drew Brees and Jonathan Vilma share some of their conversations with Payton after he returned to the Saints “as a man on a mission.”