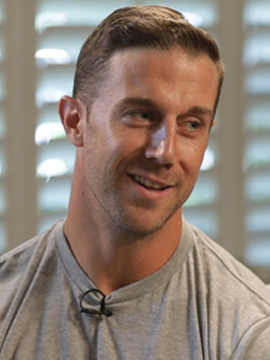 Veteran Chiefs QB, Alex Smith, invites Graham to both his Kansas City condo and to Chiefs training camp for an In Depth look at his rising career and a discussion that includes the many obstacles Smith endured en route to his current role as the leader of the Chiefs. Smith talks openly about what it was like being a young QB charged with turning around a “dysfunctional” 49ers franchise, losing his job to Colin Kaepernick and why this could be his last year with the Chiefs, among many topics. The episode also includes conversations with those who know Smith best, including his wife, Elizabeth, Coach Andy Reid and Pro Bowl tight end, Travis Kelce.

Kansas City Chiefs quarterback, Alex Smith, tells the story of his first truck, which he nicknamed “The Red Baron.” Smith offers his thoughts on why his dad bought him such an unimpressive truck and why he waited until his 6th year in the NFL to purchase his first new car.

Kansas City Chiefs quarterback, Alex Smith, on the educational influence of his father, who was also the school principal. Smith shares stories of competing in speech competitions, serving as class president, earning his economics degree in two years and recognition for his high IQ.

Alex Smith on playing football at Helix Charter High School in La Mesa, CA with Reggie Bush. Smith describes just how exceptional Reggie Bush was on the football field and jokingly blames Reggie for being so talented that Alex rarely got to throw the ball. Plus, Alex talks about how his older brother inspired him to play football and specifically, quarterback.

Alex Smith: I never aspired to play in the NFL

Kansas City Chiefs quarterback, Alex Smith, on obsessing over the top ranked high school quarterbacks in California, receiving a scholarship offer to play for the University of Louisville from his uncle – the head coach – and frustration with the outcome of forfeiting his redshirt year at the University of Utah. Plus, Smith says he never even thought about playing in the NFL until after his last regular season game with the Utah Utes, even though he was the top pick in the NFL draft.

Alex Smith looks back on the intense pressure he put on himself as the No. 1 NFL draft pick and the rookie QB charged with fixing the 49ers ailments. Smith says his fear of making mistakes and the pressure to be perfect led to a poor rookie season and that over the years he’s learned to take a different approach.

Alex Smith reflects on the 2008 death of his best friend, David Edwards, including the many emotions that followed and how the traumatic event shifted Alex’s perspective.

Quarterback Alex Smith recalls the sting of hearing criticism from Jerry Rice, trying to lead his team despite dysfunction throughout the entire 49ers organization and how it got so bad that he looked forward to playing on the road, away from the boos of 49ers fans.

Kansas City Chiefs quarterback, Alex Smith, explains how he developed a philanthropic passion for supporting foster care kids through college, the harsh reality of kids emancipating from the foster care system and ending up at homeless shelters and the success of Alex’s Guardian Scholars program with San Diego State University.

Quarterback Alex Smith on making peace with the 49ers and the Bay Area before his trade to the Chiefs, how he hoped he would follow Coach Andy Reid to Kansas City and responds to the notion that both he and Coach Reid came into their new franchise with a chip on their shoulder, ready to prove their former teams wrong. Coach Reid chimes in as well to discuss his admiration of Smith before they both landed in K.C. and giving Alex more pre-play control.

Alex Smith: This could be my last year in K.C.

Alex Smith shares his perspective on job security as a veteran QB with the Kansas City Chiefs and why he mentors first round draft pick and rookie QB, Patrick Mahomes II. Plus, Coach Andy Reid offers his perspective on why the Chiefs drafted a QB when they did and how Smith is going above and beyond to mentor Mahomes.

QB Alex Smith looks back on the 2012 season with the 49ers, in which he eventually lost the starting job to Colin Kaepernick – who proceeded to help the team advance to Super Bowl XLVII. Smith talks of how difficult it was to watch Kaepernick play well and gives his take on what he would have done if in Coach Jim Harbaugh’s position.

Alex Smith shares the story of when he and his uncle jokingly pretended that a little girl’s note had traveled on its own from Idaho to the beaches of San Diego, how the local media ate up the alleged story and his embarrassment when coming clean as a shy 8-year-old.

Kansas City Chiefs quarterback Alex Smith on his sister MacKenzie’s career work with Michelle Obama and how it afforded his family personal access to President Obama and the oval office, plus Alex shares a funny story of his son discreetly devouring the apple centerpiece in the Oval Office.

Alex Smith: I listen to NPR before games!

Alex Smith invites Graham to ride along and the two joke about the trash in Alex’s car, why Alex tunes in to National Public Radio (NPR) almost any time he’s driving – including right before Chiefs games – and the QB’s aspirations to play for 5-7 more years.

Alex Smith in the gym: My training regimen

Alex Smith on old vs. young QB competitions at camp

Alex Smith walks through a typical day at Chiefs training camp, including the competitive QB competitions that occur each afternoon and the challenges to stay short-sided and maintain a sense of urgency throughout camp. Plus, Travis Kelce – who played QB in high school – talks of joining the competitions at camp and how Alex tends to dominate.

Chiefs QB Alex Smith shares the inspiration behind his tattoo, which he got – alongside his dad – as a tribute to the fathers in the family. The Serbian cross inked on Alex’s back also pays homage to his great grandfather, who immigrated to America from Serbia.

Andy Reid: Michael Vick would be a heck of a coach

The Kansas City Chiefs coach Andy Reid and tight end Travis Kelce offer their thoughts on having Michael Vick at training camp as a coaching intern. Reid talks of Vick’s bright future as a coach and Kelce looks back at his childhood idolizing Vick, as a young QB at the time.