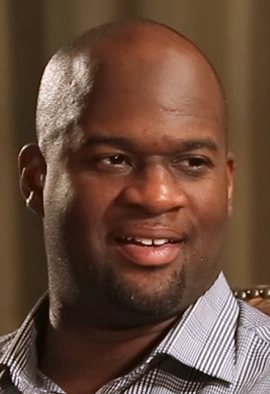 Graham talks with the recently-retired, two-time Pro Bowl quarterback, Vince Young. The 2006 Rookie of the Year talks about his fallout with Coach Jeff Fisher and the Tennessee Titans, getting into and rebounding from bankruptcy and the passing of his friend and father figure, Steve McNair. Young also looks back on his Rose Bowl championship with the University of Texas and his post-NFL careers at the university, as an analyst with the Longhorn Network and as owner of Vince Young Steakhouse in Austin.

Vince Young: I can still play ball, but needed to move on

Vince Young on the bike accident that almost took his life

As a kid, Vince Young was hit by a car and spent months in the hospital recovering from life-threatening injuries

Vince Young on growing up surrounded by drugs, alcohol, sex

Vince Young describes a childhood of poverty and being exposed to sex, drugs and drinking at an early age

Vince Young: Mom said I would be dead, crippled or in jail

After harsh words from his mom following a fight at school, Vince Young vowed to make better decisions

Vince Young: I try to be a better father than my dad was

Vince Young on his bond with his father-figure and late NFL quarterback, Steve McNair, who was murdered in 2009

Vince Young: I wish I would have just shut up and played football

Vince Young on bankruptcy: I hope I can be an example

Vince Young discusses lessons learned from his financial mistakes, most notably: not signing power of attorney

Vince Young on working in Diversity & Community Engagement, plus he joins Ricky Williams for a production meeting

Vince Young gives Graham a taste of Texas at his restaurant