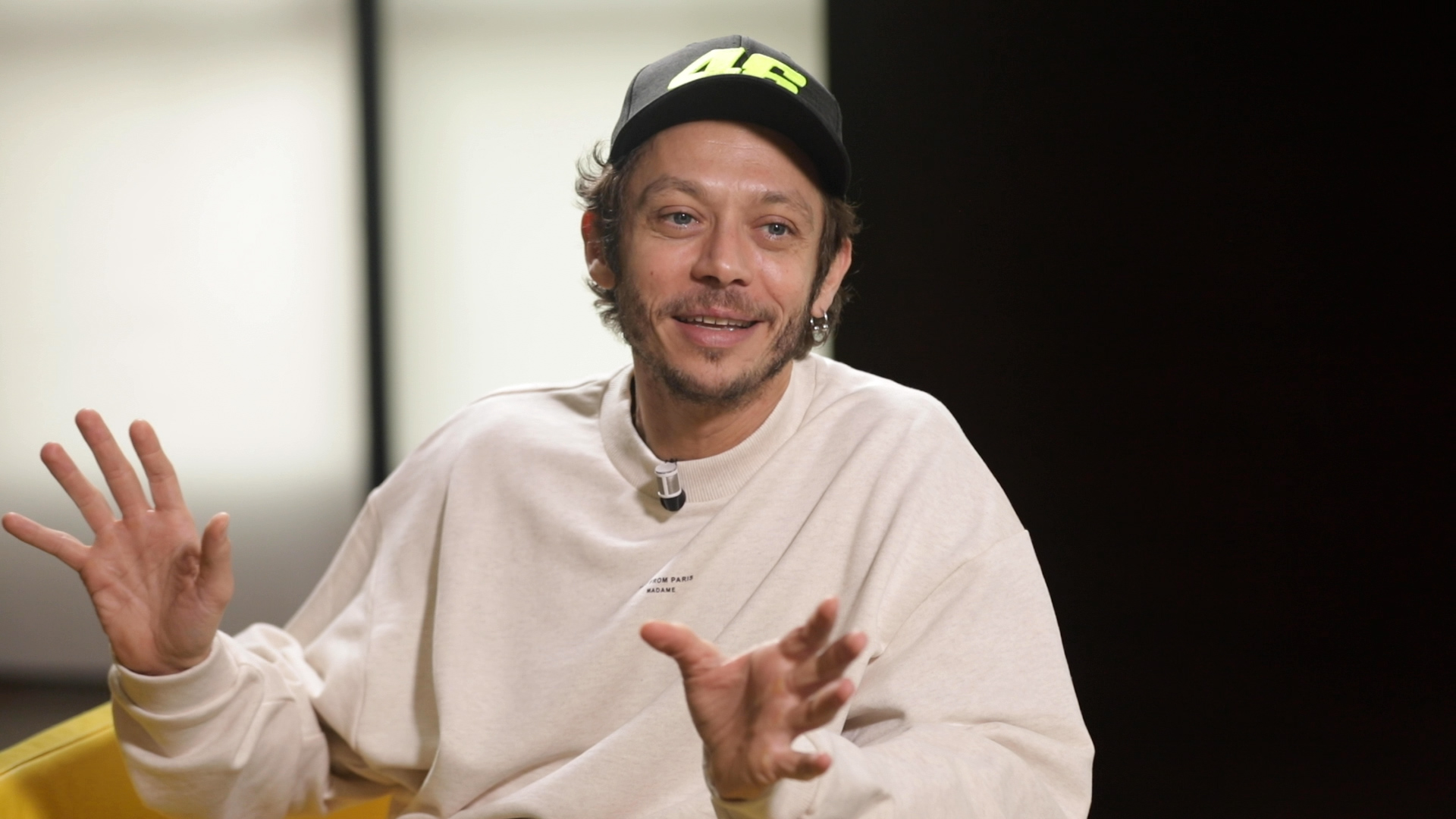 We’re in the Italian countryside of Tavullia with nine-time MotoGP champion, Valentino Rossi. Fresh off of his November 2021 retirement, Rossi reflects on his next adventures, which include fatherhood and a focus on his VR46 foundation. The racing legend talks of dropping out of high school to pursue his passion, the tragic loss of a friend at the racetrack and a bet on himself when leaving the most dominant team in his sport. Plus, Rossi takes Graham for a spin in his modified rally car and we catch up with his girlfriend Francesca Sofia Novello over lunch.

Nine-time Grand Prix motorcycle racing champ Valentino Rossi talks through how the COVID-19 pandemic shut down his racing schedule for two months and eventually gave him the realization he can survive without the sport.

MotoGP legend Valentino Rossi remembers the devastating, deadly crash of his friend Marco Simoncelli. Ten years later, Rossi – who had taken Simoncelli under his wing – explains how the late racer was the inspiration for what would become the VR46 Academy.

Valentino Rossi talks of a secretive, pivotal decision in 2006 when he earned an opportunity with Ferrari’s Formula 1 team, but ultimately decided his heart was in MotoGP. Rossi remembers sleeping at the racetrack before his trial race and pressure from his mother and inner circle to make the jump to F1.

Rossi remembers his tense rivalry with teammate Jorge Lorenzo and compares it to the infamous Formula 1 feud between Mercedes F1 teammates Lewis Hamilton and Nico Rosberg. Rossi describes an especially hard moment with Lorenzo at Barcelona in 2009 and initial frustrations when Lorenzo joined as a Yamaha teammate in 2008.

MotoGP legend Valentino Rossi recalls first learning the Italian government claimed he owed roughly $163 million in back taxes. The investigation was linked to Rossi’s decision to move to London in 2000.

Rossi reveals the mindset behind his best-in-class performances, including varying emotions in the hours leading up to a race, pushing the limit without crossing a line and playing into multiple superstitions before a race. Later, Rossi admits to a punctuality problem and says he works best when under pressure.

MotoGP legend Valentino Rossi talks about the contrast in spending habits between him and his mother, Stefania Palmer. Plus, Rossi remembers buying a Porsche as his first big purchase once he became famous and what that meant to him.

Valentino Rossi: A tour of my warehouse and VR46 HQ

Rossi offers a detailed tour of his VR46 headquarters in Tavullia, Italy, including his deep arsenal of high-performance motorcycles and his ecommerce business. The nine-time MotoGP champ explains how his business has grown from housing just three bikes to the warehouse full of equipment he shows off during the tour, and how the ecommerce side grew from a line of eight products to selling 800 items today.

Valentino Rossi: Committing to Francesca after her ultimatum

We join MotoGP legend Valentino Rossi and his girlfriend Francesca Sofia Novello for lunch at Rossi’s restaurant in Tavullia, where they share stories of their meetings, why the relationship works and how they both first learned of Francesca’s pregnancy. Later, Francesca and Valentino joke that she is now his personal shopper and that she picks out what clothes he will wear each day

Valentino Rossi invites us to tour a 200-year-old home he converted into as a racer’s paradise. Rossi shows off his dirt bikes and locker room, then takes Graham on a modified rally car ride around the big track in his 400 horsepower car… despite Rossi’s disgruntled track manager.

Valentino Rossi: My parents are more like my friends

Rossi talks of his upbringing with his mother Stefania and his father Graziano. The MotoGP legend recalls how his life changed after his parents separated, the unique aspects of their relationships today and how together they’ve helped propel him to a world class career.

Valentino Rossi: Why I dropped out of high school

Rossi offers up stories from his childhood, including run-ins with the police that led to a confiscated scooter and the moment he realized he needed to drop out of high school.

Speed bumps in Italy on the Valentino Rossi shoot

Graham and the crew offer a behind-the-scenes look at their adventures before, during and after their day-long episode shoot with MotoGP legend, Valentino Rossi. Director of photography Seth saves the day, plus Graham is impressed with Rossi’s English fluency and offers a shout-out to Kelly Slater for making it all happen.