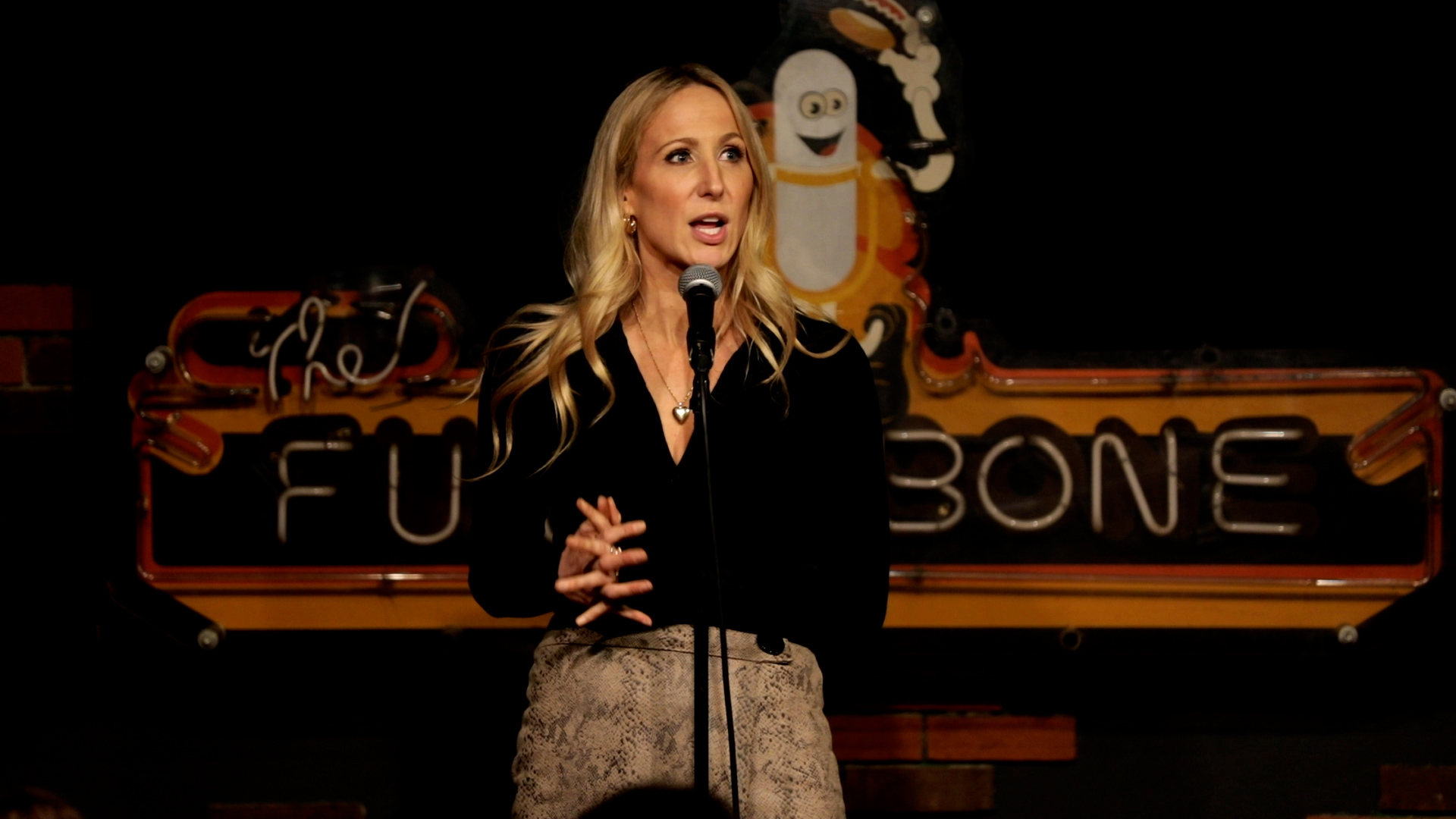 We’re in St. Louis with the unapologetically unfiltered comedian Nikki Glaser. The HBO, Comedy Central and Netflix star truly lets us in by inviting Graham and the crew to her apartment, to her parents’ home and to Boston for exclusive access to her vocal cord surgery. The cameras are rolling as Nikki hears her new, higher-pitched voice for the first time and – back in St. Louis – she candidly shares stories of addiction, depression and how the pandemic prompted an unexpected career shift.

Nikki Glaser during disorder: “Let me die in my sleep”

Comedian Nikki Glaser candidly shares how a tragic death her senior year in high school was the start of years of various eating disorders, including anorexia and bulimia. Glaser recalls losing nearly 60 lbs. in four months and is joined by her father EJ Glaser as they both remember when the disorder nearly turned deadly.

Comedian and aspiring singer Nikki Glaser explains why she needs vocal cord surgery. Nikki explains the trauma on her vocal cords, John Mayer’s advice for non-verbal communication, plus her interest and curiosity in the unknown – what she can learn about herself during three weeks of silence.

Nikki Glaser lets us in on how a return home to St. Louis reinvigorated a childhood passion for music, and her plans today to more fully pursue a second career as a singer/songwriter. The Netflix, HBO and Comedy Central star predicts she’ll need to change her stage name to lessen any nepotism that would stem from her comedic success. Plus, we hear how Nikki’s early exit on Dancing with the Stars – which she calls the most humiliating thing to ever happen to her – actually helped put things in perspective and fueled her confidence to pursue a musical career.

Nikki Glaser raves about her role as host of HBO’s “FBoy Island,” including the surprise twist during the network’s recruitment and her gratitude for HBO wanting to work with her as much as she wanted to work with HBO.

Nikki Glaser talks of her bout with alcoholism, saying she used it as a crutch to ease her social anxiety, but that she no longer needs to drink to enjoy social and intimate experiences. The HBO, Comedy Central and Netflix star reflects on the life-changing tragedy of losing her cousin to alcohol consumption, predicting that alcoholism would have eventually taken her as well… had she allowed the illness to progress.

Nikki Glaser: Fantasizing about suicide helps me sleep at night

Nikki Glaser candidly shares her struggles with depression and suicidal ideation, which she’s been wrestling with ever since a traumatic “show and tell” in the third grade. The HBO, Comedy Central and Netflix star describes what it feels like for her to fantasize about committing suicide and how she maintains power over the dark thoughts by speaking them out loud. Nikki says her transparency on the issue has allowed her to connect with others who can relate, which helps her and many others not feel alone in their struggles.

Stand-up comic Nikki Glaser pinpoints early influences of Jenny McCarthy, Sarah Silverman, Amy Schumer and Howard Stern, among others. Plus, she remembers attending a Dave Chappelle event in 2002 – before Chappelle found mainstream fame – and her reason for ducking Conan O’Brien’s guest booker until the time was right.

Nikki Glaser: Not taking “No” for an answer as an aspiring comic

Nikki Glaser recalls her low expectations during an early audition on NBC’s “Last Comic Standing.” Nikki – along with her dad EJ – remember how she turned an initial first round rejection into an eventual trip to Hollywood for the show’s semifinals, and EJ reflects on how that moment showcased her will to succeed in the industry.

Nikki Glaser: I could be so much better

Nikki Glaser dishes on the intricacies of her comedic process, and offers a self-analysis that she’s not living into her full potential. Nikki explains that her best comedic performances come when she’s invested significant time in preparing for those gigs, and yet she generally opts out of that level of preparation… unless she’s performing on someone else’s show (a late-night appearance, Comedy Central roast, etc.). Plus, we hear from Nikki’s father EJ Glaser, who looks back on the reason he and a friend couldn’t stand to sit through Nikki’s second set.

Nikki Glaser: Encouraging my boyfriend to sleep around

Comedian Nikki Glaser walks us through the ebbs and flows of her long-term relationship with boyfriend Chris Convy, including their first meeting, Nikki’s request for Chris to entertain experiences with other women and her admission that she’s found “the one.” Plus, we hear from Nikki’s father EJ, who says that it’s about time Nikki and Chris “sh*t or get off the pot.”

Nikki Glaser during home tour: Cutting myself as punishment

Comedian Nikki Glaser offers us a tour of her St. Louis apartment, which includes a “Thank You” note from Howard Stern, a $4,500 Taylor Swift guitar and the last item she ever shoplifted. While discussing her former shoplifting addiction, Nikki recalls getting caught by a manager at Urban Outfitters and how the incident led to Nikki going home and inflicting self-harm as a personal punishment.

Nikki Glaser: I don’t deserve this much money

Stand-up comic, TV show host and aspiring singer Nikki Glaser gets introspective explaining her strong work ethic and her cravings for accomplishment. Plus, she talks about money and earnings, saying she saves a good portion of her payouts to support friends and family, in case steep medical expenses arise.

Comedian and aspiring singer Nikki Glaser remembers a regrettable criticism of Taylor Swift that made its way into Swift’s Netflix documentary, “Miss Americana.” Nikki – a Taylor Swift superfan herself – explains the horrible feeling of hurting Taylor and their reconciliation on Instagram.

Nikki Glaser walks us through the erratic pacing of her big break in 2009 on The Tonight Show with Jay Leno. She recalls giving up hope after not hearing from the show for at least a year, then suddenly getting a call from a booker that Paula Abdul had to cancel and they wanted Nikki on the show in a matter of hours. The Comedy Central, HBO and Netflix star says the last-minute nature of the booking sent her scrambling – while hungover – and frantically running through her approved set just in time to impress the show’s producers on site.