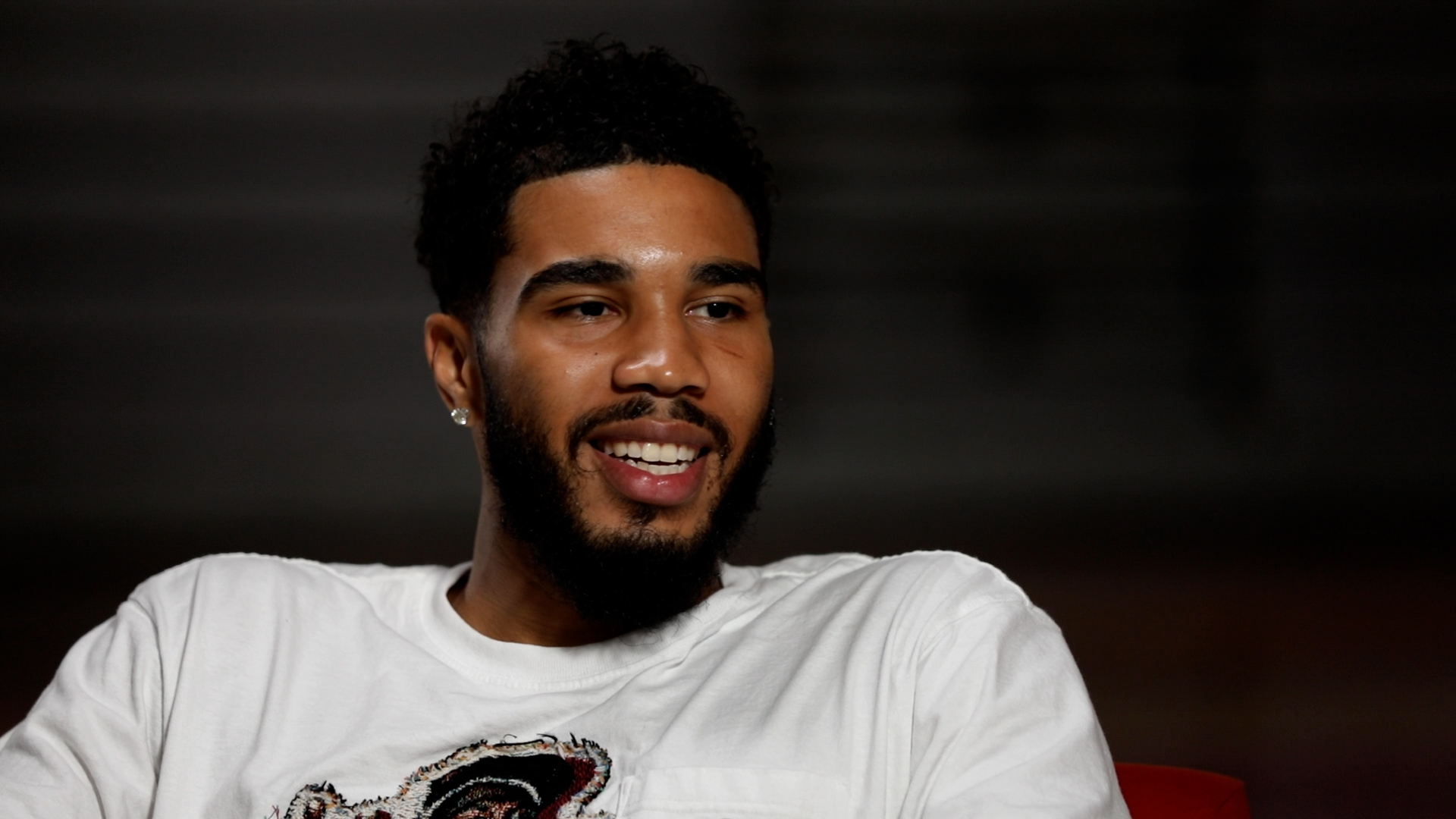 We spend three days with three-time NBA All-Star Jayson Tatum at both his hometown of St. Louis and his mom’s house in Boston. The star forward reflects on the Celtics’ NBA Finals loss to the Warriors, including criticism from The Boston Globe. Plus, Jayson’s son Deuce sees his new bedroom for the first time and Jayson opens up about why he takes a much different approach to parenting than his own dad did years ago.

Jayson Tatum to son Deuce: I was better than you at 4

We’re in the Boston area at the home of Jayson Tatum’s mom, Brandy Cole. Jayson and his son Deuce offer up a look at Deuce’s playroom and bedroom, then we head outside to the putting green and basketball court. Jayson talks of lessons he’s teaching Deuce, including how Jayson has worked hard to get to where he is today.

Jayson Tatum: Can I be the best player on a championship team?

Jayson Tatum fondly remembers waking up early to hone his craft in an empty gym at 6:15AM as a high schooler – a routine that his mom Brandy says gave her the realization her son really would play in the NBA one day. Plus, Jayson candidly shares some of the self-doubt that crept in early into the 2021-2022 season, as the Boston Celtics started the season poorly. He goes on to share his mental process of internalizing any issues and his mom rejoins the conversation to explain why she’d intentionally piss her son off with strategic texts at halftime.

Jayson Tatum and his mom / business manager Brandy Cole talk finances, including how they’ve learned to work together to handle discretionary purchases like designer watches. Plus, both Jayson and his mom reflect on how they’re not far removed from living check-to-check and struggling to pay for gas or household items, like soap.

Boston Celtics superstar Jayson Tatum candidly details his tough love, basketball-centric relationship with his father, Justin Tatum. Jayson recalls only spending time with his dad as a kid at basketball-related events or at the barber shop and remembers his dad’s very public abuse, even pinning him up against a locker in front of teammates. And through it all, Jayson says his dad was trying to strengthen and toughen him, and the tough love worked.

Jayson Tatum: Embarrassing myself in front of Michael Jordan

NBA star and Jordan Brand partner Jayson Tatum shares an embarrassing story from his 2019 signing day with Michael Jordan in Paris, when he was so nervous to first meet MJ that his hands were shaking and he accidentally spilled MJ’s glass of wine all over the table.

Jayson Tatum: Hiding a pair of secret shoes at the house

Michael Jordan Brand partner Jayson Tatum talks about his commitment to shoe design and his strong relationship with Senior Color Designer Kelsey Amy at the Jordan Brand. He goes on to say he already has an exclusive pair of his yet-to-release signature shoe – the Jordan Tatum 1 – at his home and can’t wait to show them to the world in the months ahead.

Jayson Tatum: Broke down in a hotel bathroom after Kobe’s death

Boston Celtics superstar Jayson Tatum remembers idolizing Kobe Bryant as a kid and falling in love with Kobe’s playing style, which he says was like admiring art. Tatum gushes over Kobe’s obsession with basketball and says it helped him realize the sacrifices necessary to perform at an elite level. Later, Tatum remembers getting an unsolicited text from Kobe and later flying to L.A. to workout with him. We also hear how Tatum first learned of Kobe’s passing and the difficulties of accepting the harsh reality.

Jayson Tatum: The NBA star I want to link up with

Boston Celtics star forward Jayson Tatum calls his Team USA Tokyo Olympics teammate Kevin Durant one of the best to ever play the game. Plus, he gives his take on NBA superteams and lets us in one the one player he most wants to play with before his NBA career is over.

Boston Celtics superstar Jayson Tatum remembers idolizing Kobe Bryant as a kid and falling in love with Kobe’s playing style, which he says was like admiring art. Tatum gushes over Kobe’s obsession with basketball and says it helped him realize the sacrifices necessary to perform at an elite level. Later, Tatum remembers getting an unsolicited text from Kobe and later flying to L.A. to workout with him. We also hear how Tatum first learned of Kobe’s passing and the difficulties of accepting the harsh reality.

Three-time NBA All-Star Jayson Tatum looks back on surprising pregnancy news from his high school girlfriend, shortly before he entered into the NBA Draft. Jayson remembers fearfully hiding the news, as he believed it might impact his draft stock. Plus, he shares the stories of first telling his then-Boston Celtics coach Brad Stevens the news, and calling his mom Brandy at 3 a.m. to let her in on the secret. Jayson says the birth of his son Deuce quickly shifted his perspective and he immediately decided “nothing else matters” beyond caring for his child.

NBA superstar Jayson Tatum responds when forced to pick between a series of two options, including choosing between Michael Jordan and Kobe Bryant, Drake or Nelly and dunking or draining a three-pointer.

NBA star and St. Louis native Jayson Tatum gushes over one of his favorite foods: thin crust pizza from a St. Louis-based pizzeria called Imo’s. Jayson explains how his family helps him enjoy Imo’s Pizza while he’s away from his hometown. Plus, the three-time NBA All-Star says he’s hired a chef to prepare three meals per day and a trainer who put him on a diet for the first time in his life. Jayson explains the need for change after he felt fatigue in the 2022 Finals against the Golden State Warriors.

Jayson Tatum: I want to open a school in St. Louis

We’re with Jayson Tatum at two of his basketball camps in St. Louis, including his foundation’s free camp for inner city kids and another one at his alma mater of Chaminade High School. We also check out the basketball court and computer lab he donated to the Wohl Community Center and Jayson shares that he wants to one day open up a school in St. Louis.

Enjoy a behind-the-scenes look at our time in St. Louis and Boston with Jayson Tatum and his family, including feedback from the three-time All-Star himself after one of his longest sit-down interviews ever. Plus, Jayson’s son Deuce welcomes us into his grandma’s Boston home and works on his vertical leap with our audio tech.